Inside the Heartbreaker bar, where convenience is clearly key.
Like a LocalRob Libecans

Commonly known as the food capital of Australia, and Rob Libecans of the city’s famed Fancy Free pop-up bar knows all the best restaurants in Melbourne and more.

My name is Rob Libecans and I’m in love with Melbourne! I’ve been here for 8 years and lived in just about every pocket of this city. I currently reside in the winemaking region due east of the city in the Yarra Valley with my wife Emily, my newborn son Sandy, and my boxer dog, Dempsey. I’ve run some of the world’s best bars (Black Pearl, Baxter Inn, and White Lyan) and now have a pop-up bar called Fancy Free that travels the world adding glitter and good times to drinks.

Melbourne has it all. The culture, the art, the hustling laneways, and the nightlife—and it’s unlike the rest of Australia. Melbourne’s charm is its diversity. The people and the geography really set this city apart. The city is easy to navigate, but you’ll be tested on finding some of her hidden gems. To the south of the city you have some incredible beaches on the Mornington Peninsula; to the East, you have the Yarra Valley wine region and the Dandenong ranges; the north boasts the bush and Victoria countryside. 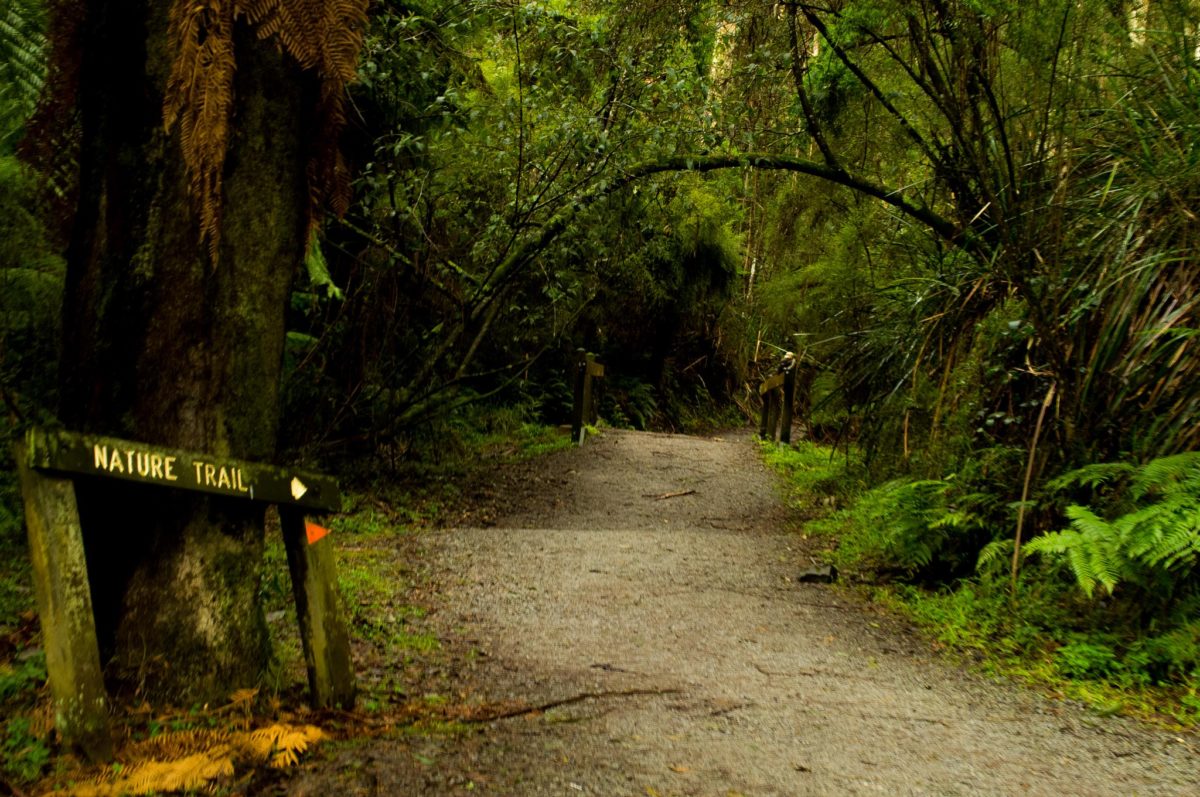 The start of the path to the 1,000 Steps at Mount Dandenong in Ferntree Gully. Ghatamos.

A Perfect Day in Melbourne with Fancy Free’s Rob Libecans

Melbourne is famous for its coffee and its eating culture. I say this to all visitors that come here: If you find bad food in Melbourne, you’ve gone looking for it. Most days, I’m strapped to my laptop and working from a cafe, planning concepts and events. There’s no better place to do that than Heart Attack & Vine on Lygon Street. Don’t be fooled by the name, the owners are fans of Tom Waits and not slingers of greasy fair. The vibe is chill but upbeat. The venue is well known for its sandwiches (I can’t avoid the roast pork) and its small plates that feature a blend of Spanish and Italian classics with a modern twist.

If you’re feeling adventurous and also have access to a car, Ferntree Gully 1,000 Steps is a 45-minute drive from the city. It’s a walk that accommodates all fitness types and ages and is split into three levels that all take around 25 minutes. You can opt for the gentle path that cuts around the side of the hill with open views of the forest and the valley; the intermediate trail that slopes around the trees; or the challenging route through the eucalyptus forest. Being able to reach the summit is rewarded with a beautiful view of the city and the open landscape around it. You’re likely to see some wildlife here, too: wallabies, king parrots, and cockatoos.

Feeling peckish? Hit up European Wine Bar on Spring Street and watch the world go by on the street. Don’t forget to get some of their famous gelato on the way out for your walk! 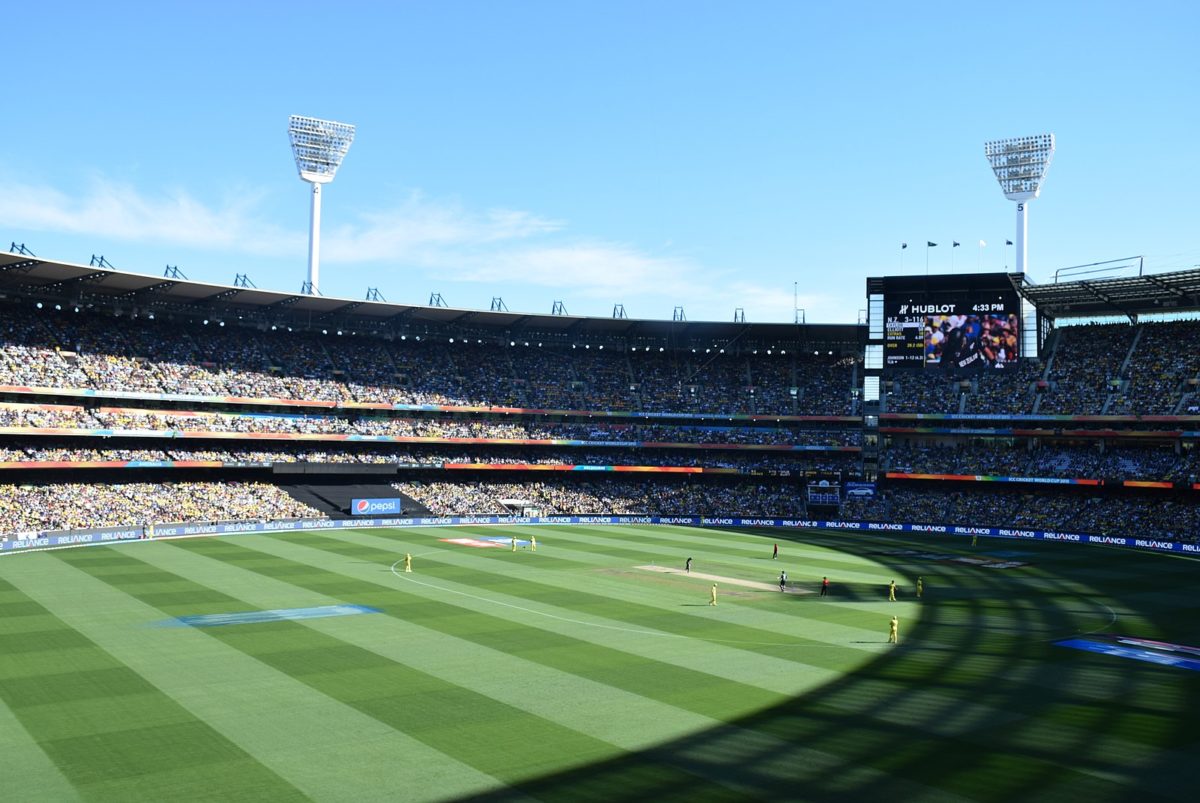 Each year, millions of people visit the Melbourne Cricket Ground, just 10 minutes from the city center.

Melbourne is crazy for AFL (Australian Football League). It’s a sport played on a cricket pitch with as many players as a soccer team. The rules are the same as netball, and it’s the only sport in the world where a team gets a point for missing a goal! Sounds great, right?! Head to the mecca for the sport: the Melbourne Cricket Ground, a 10-minute walk from the city center along the river. 100,000 spectators fill the stadium on most weekends for a gentle rivalry between all teams located in the city.

Hungry? Head to The Lincoln on Queensberry Street in Carlton (a 15-minute walk from the CBD), lauded as Australia’s best pub for two years. All the chefs here have run some of Melbourne’s most iconic kitchens. The wine selection would outshine most restaurants and the beer selection satisfies even the pickiest of the hipster mob. All this is set in a heritage building and doesn’t break the bank. 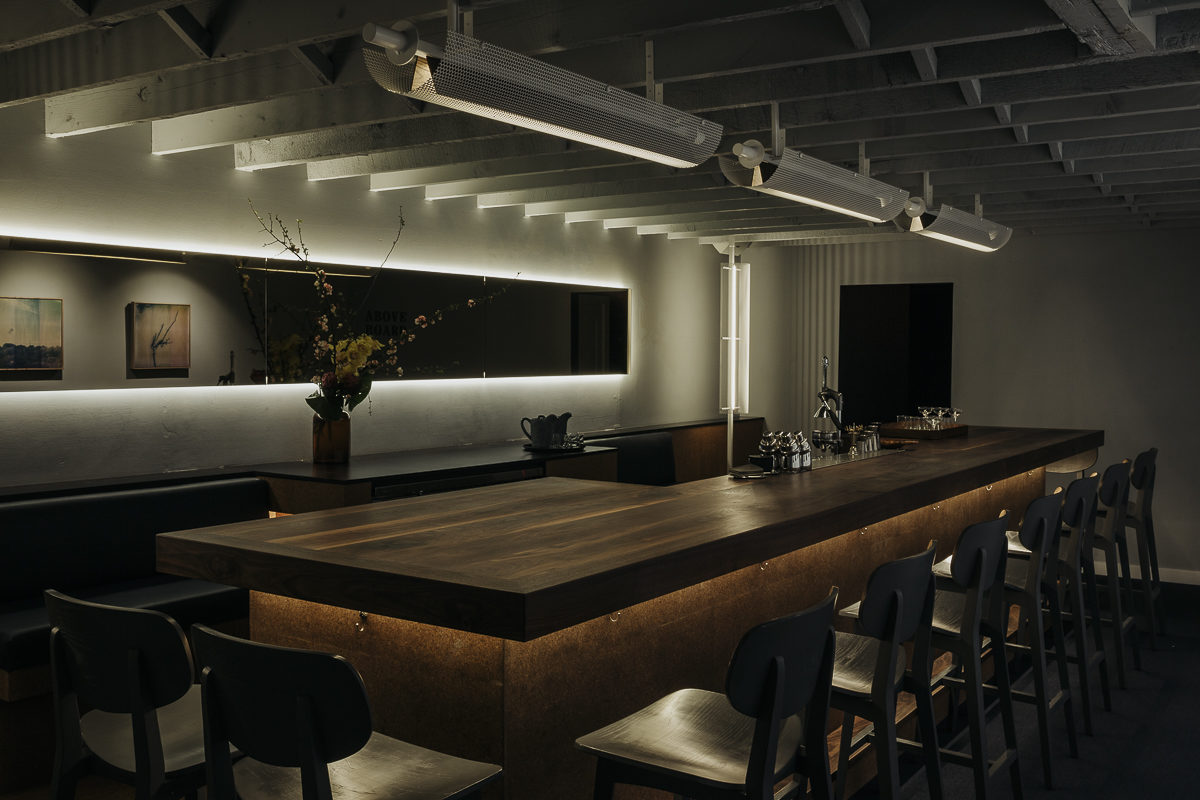 Sleek, 16-seater bar Above Board serves some of the best cocktails in Melbourne. 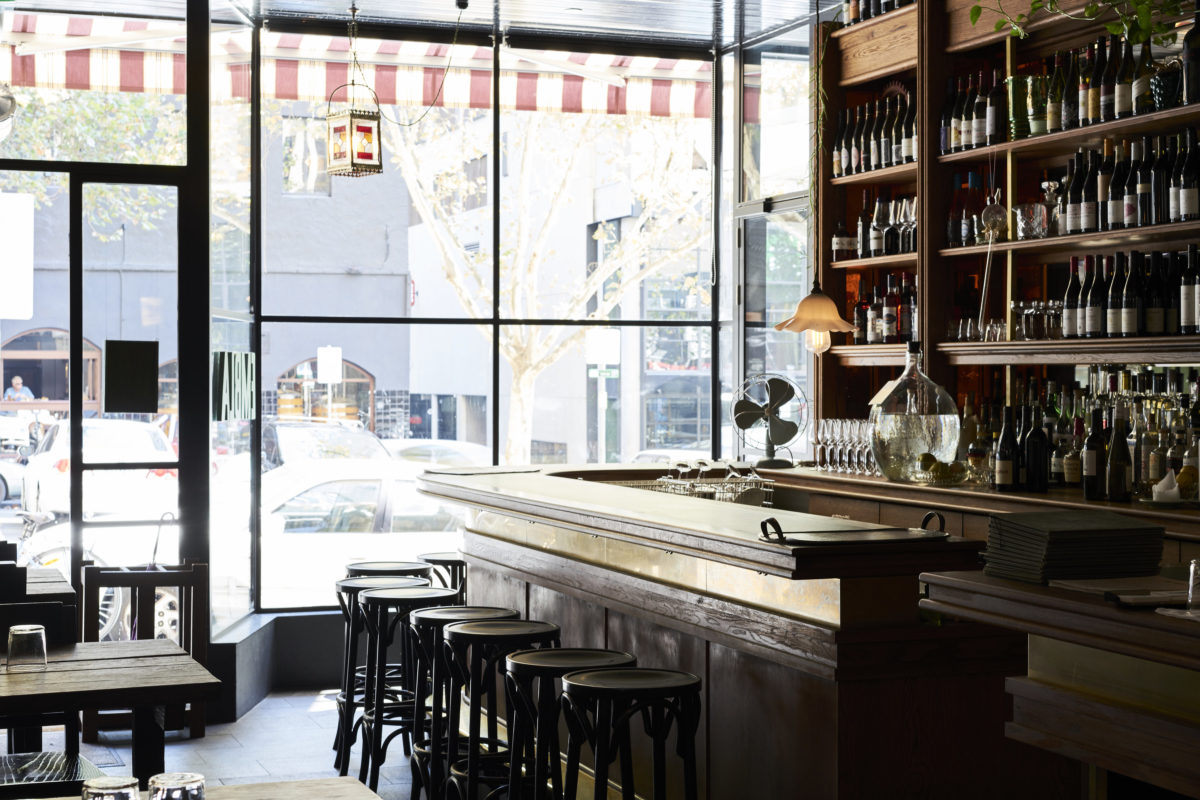 Despite its relaxed interior, both Embla's guests and staff are known for being lively. Photo by Kristoffer Paulsen. 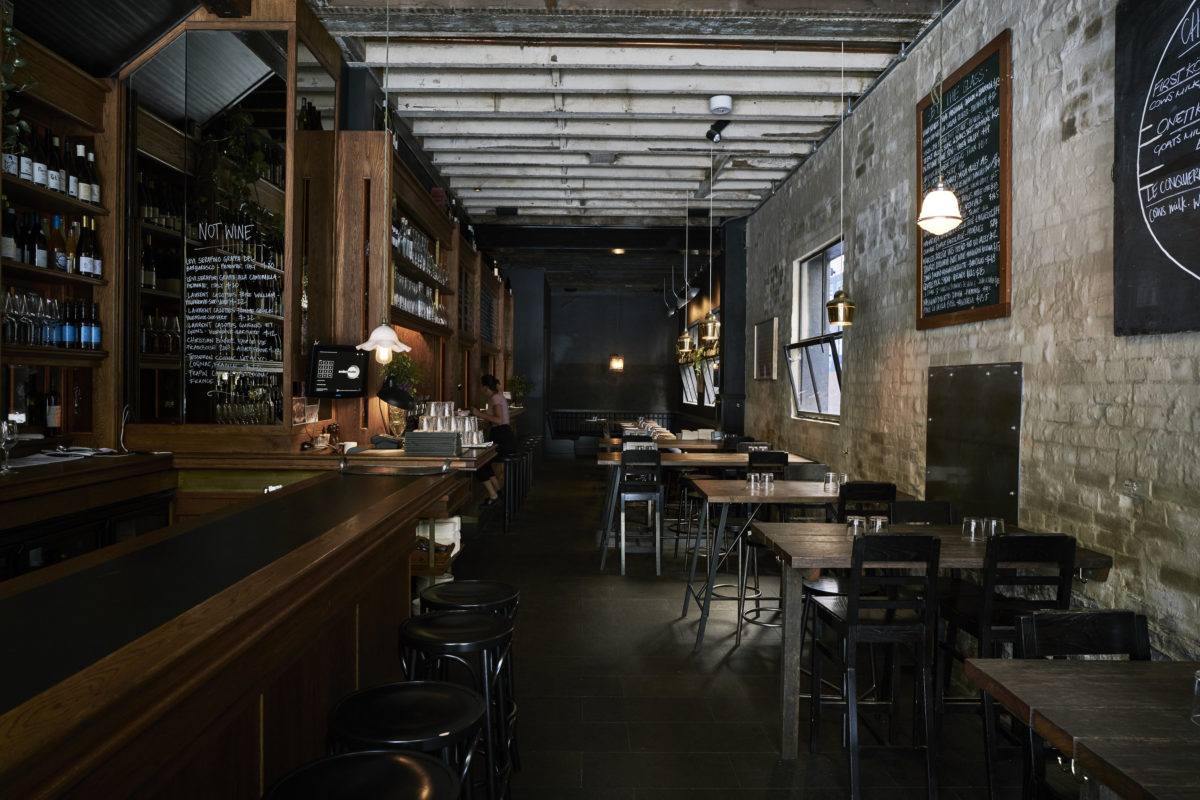 Visit Embla to experience the best of Australian hospitality (and at a great price). Photo by Kristoffer Paulsen. 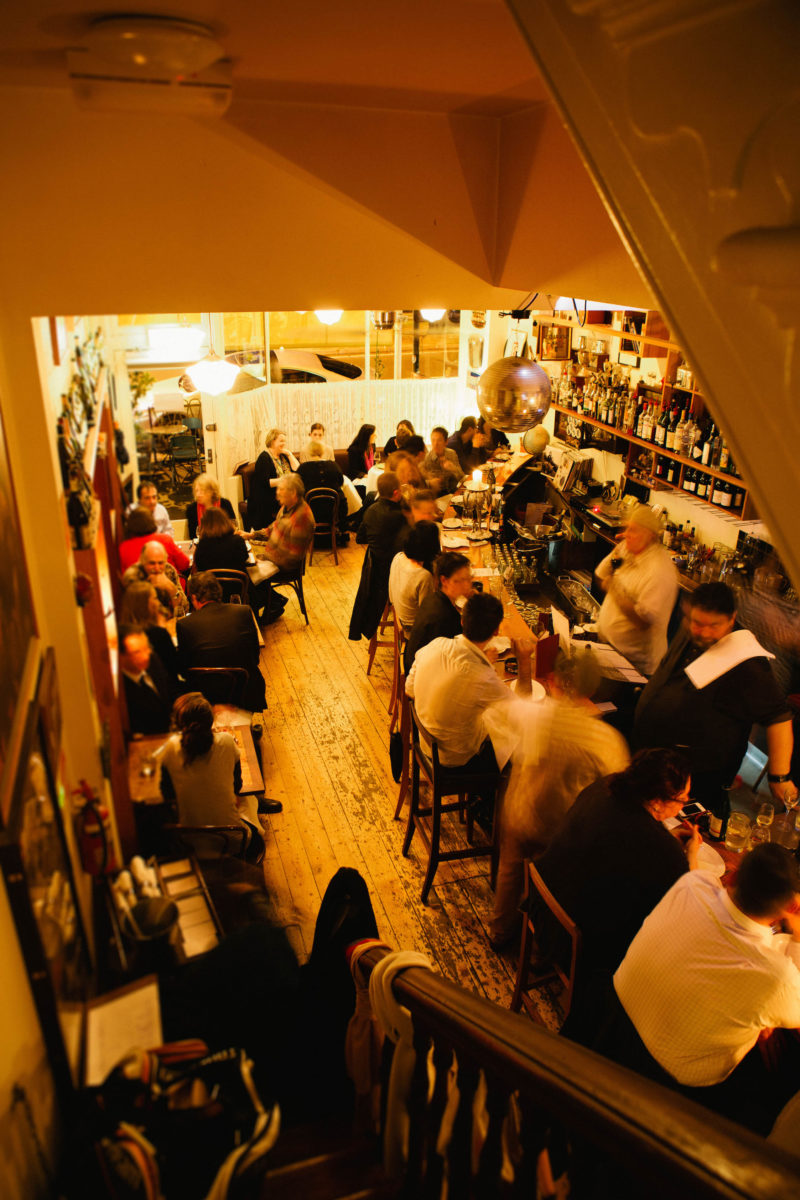 Founded by a 60-year-old English punk, Gerald's Bar is known for bringing in laid-back and friendly crowds.

Melbourne has some incredible venues that are tucked away in the rear of other bars and laneways with little to no signage. It can be frustrating at times, but the relief and joy when you do find them make it all worthwhile. Chief of them all is Above Board, a 16-seater cocktail bar situated above a liquor store in Collingwood. The attention to detail here is staggering. A 5.5-meter long bar made of exquisite black American walnut wood, beautiful soft lighting, and no back bar make this space a special place to visit. The cocktails are some of the best you’ll find anywhere.

Melbourne has long been thought of as the food capital of Oz. But there’s a new school of restaurants that seem to be cutting their own path in the city. The likes of Embla and Bar Liberty have a knack for showing guests what’s great about Australian hospitality. These sweethearts are friendly and warm; approachable in cost and menu; and best of all, they’re lively! Don’t be surprised if the music gets turned up and the staff is dancing between tables as they pour natural wines. Bar Liberty in Fitzroy is my absolute favorite. Owned by ex Attica staff Manu and Pepi (formerly on the World’s 50 Best Restaurants list). They have it all here. Order the flatbread and the cacio e pepe.

Want something quieter? Hit up Gerald’s Bar on Rathdowne Street, a small bar/ restaurant that is teeming with life. Gerald is a 60-year-old English punk that has called Melbourne his home for decades. His venue reflects his personality and his travels. There’s so much art and trinkets everywhere that it’s like dining in a friend’s bedroom. Food changes daily as does the wine. The staff has all been here for years, the music is all played on vinyl and the place is always busy but never loud. 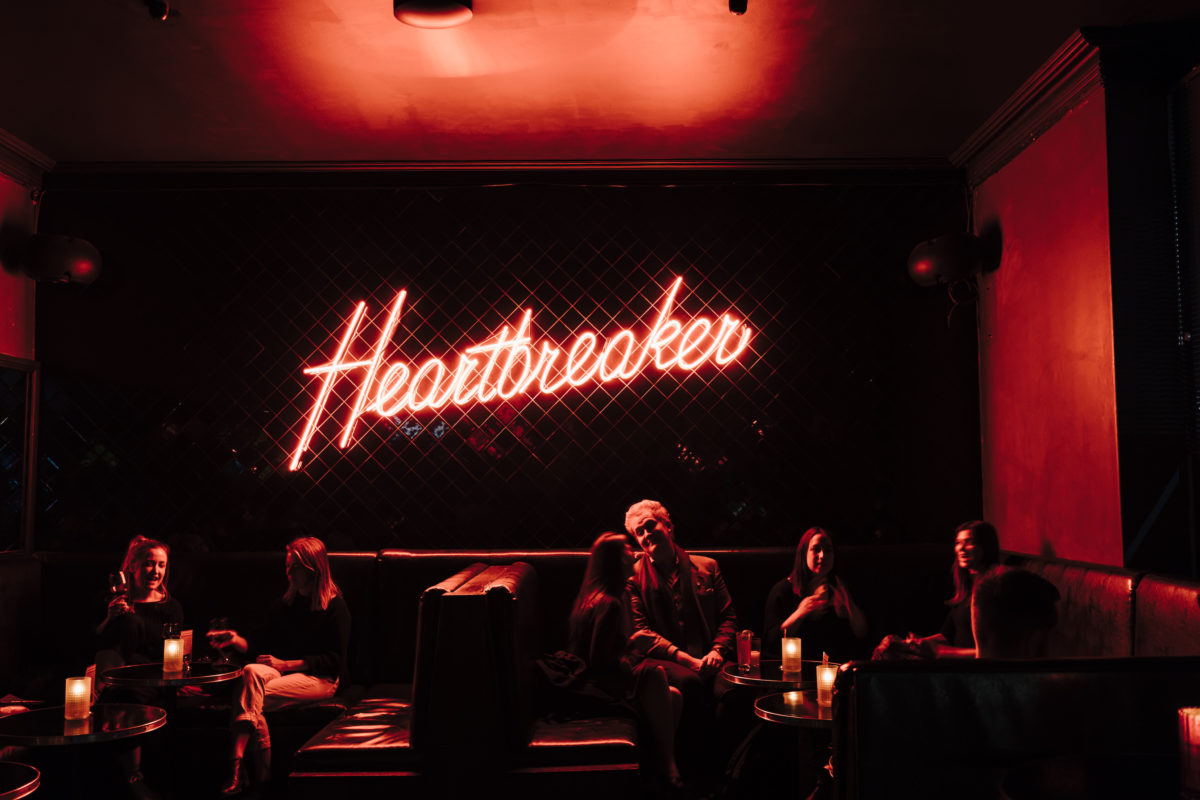 Heartbreaker brings a bit of California to Melbourne.

Rooks Return is one of Melbourne's most renowned dives. 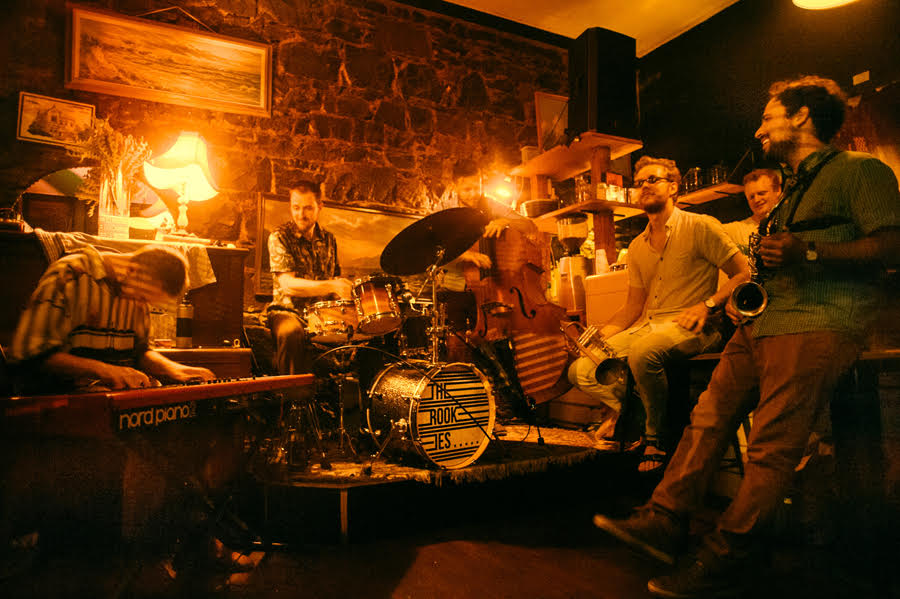 I’ll always start my night out with a martini at The Everleigh. Michael Madrusan was part of Milk and Honey in NYC for years and it shows in his first venue in Melbourne. The bar is gorgeous, the service attentive, and the drinks faultless.

Next up is Rooks Return, the kind of bar where you wipe your feet on the way out! This bar is quintessential Melbourne. Small, grungy, and fun. The perfect neighborhood bar.

On a date or with someone special? Head to Romeo Lane, one of Melbourne’s smallest bars. The drinks here are simple and well-executed. The wine list is short but well-considered and food is available if you forgot to eat.

Want to dance until late? Perfect! Head to Heartbreaker, an LA-style dive bar with a kickass music selection and beers to boot. Don’t like rock music? Head to Angel Music Bar, open until 5 a.m. with two rooms where you can boogie the night away. Also, it’s right next door to Butchers Diner, a 24-hour, 20-seater that knocks out great grill and salads without ever stopping. Great to watch the wildlife from a safe seat here. 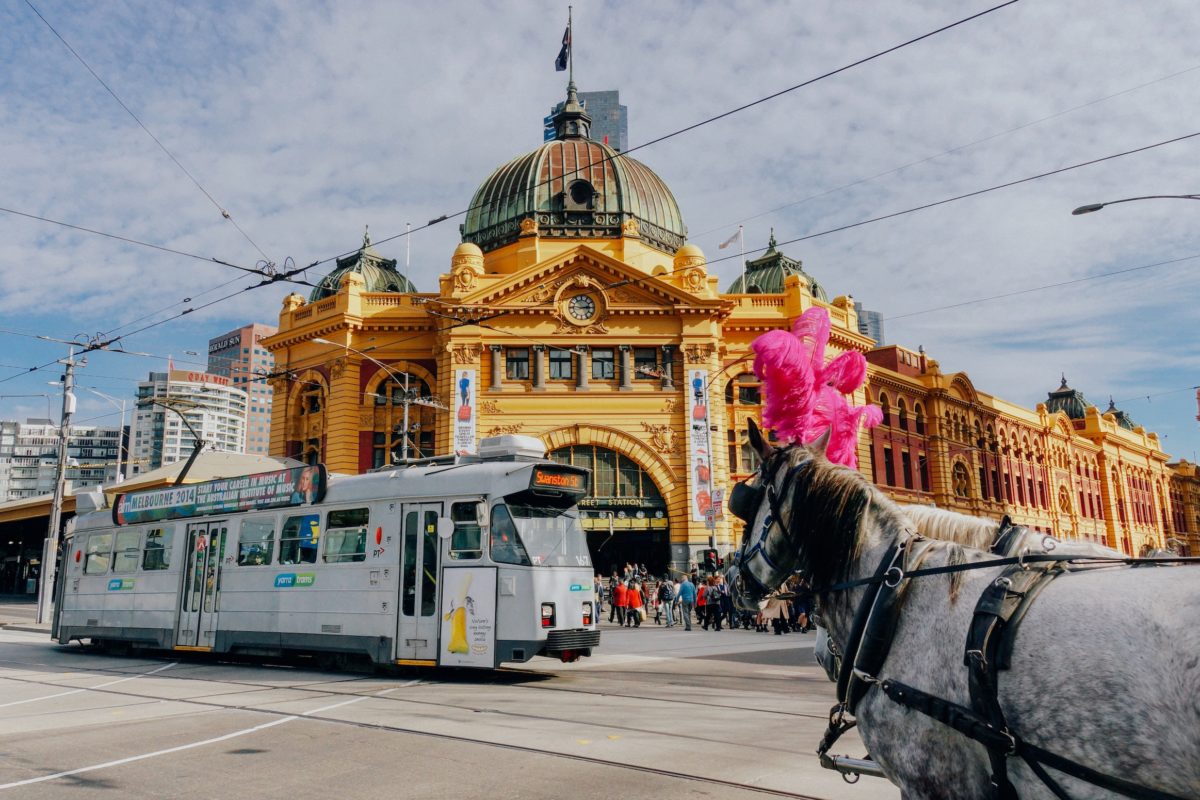 A lot of tourists get sucked into the trap of Southbank and the Casino. Don’t get me wrong, it’s a lovely development, but it’s not the true Melbourne!

Melbourne is famous for its unpredictable weather, so pack a raincoat and shorts just in case. Getting around the city is easy as for the most part it’s flat and we have a tram system that can take you anywhere without much hassle. The tram is free within the city, but make sure you pay if leaving the city limits as the inspectors can be ruthless.

People in Melbourne are super friendly and have no problem engaging with strangers in public, so don’t be alarmed. On that note too, generally, Melbourne is a pretty safe city with very little crime. City and park areas are fine to navigate even in the evening.

There’s a tipping culture in the main cities here, also. 10-20% covers it all for the most part.

Where to Stay in Melbourne

If you’re choosing to stay in an Airbnb in Melbourne, I would recommend East Melbourne—it’s the closest suburb to the city and by far the most beautiful. If you’re here to party I would recommend staying in Fitzroy or Collingwood, as that’s where most of the late-night action is.

Hotels in the city? Look no further than The Adelphi on the famous Flinders Lane.