The Best Bars and Nightlife in Dallas, Texas

The Midnight Rambler is one of Dallas's cocktail hotspots.
IndexAnnie Werner

Where to drink and go out in Dallas, Texas.

Dallas is the kind of city that enjoys a well-crafted cocktail as much as a bottle of Lone Star, and, as the birthplace of the frozen margarita machine (bless you, Mariano’s Hacienda), it’s safe to say that Dallas’s nightlife culture is well-woven into the fabric of the city.

While Dallas’s extraordinary dining scene has received well-deserved attention as of late, a lesser-known fact is that Dallas’s bars and nightlife have a culture to match it. Ever evolving (the hottest new margarita invention is the Nitrogen version at Beto & Son’s) and surprisingly unpretentious (you’ll find more dives than cocktail lounges on this list), whether you’re looking to catch some quality live music while sipping a local craft brew or try the latest infused tequila at a subterranean hotel bar, there’s something for everyone in the Dallas bar scene. 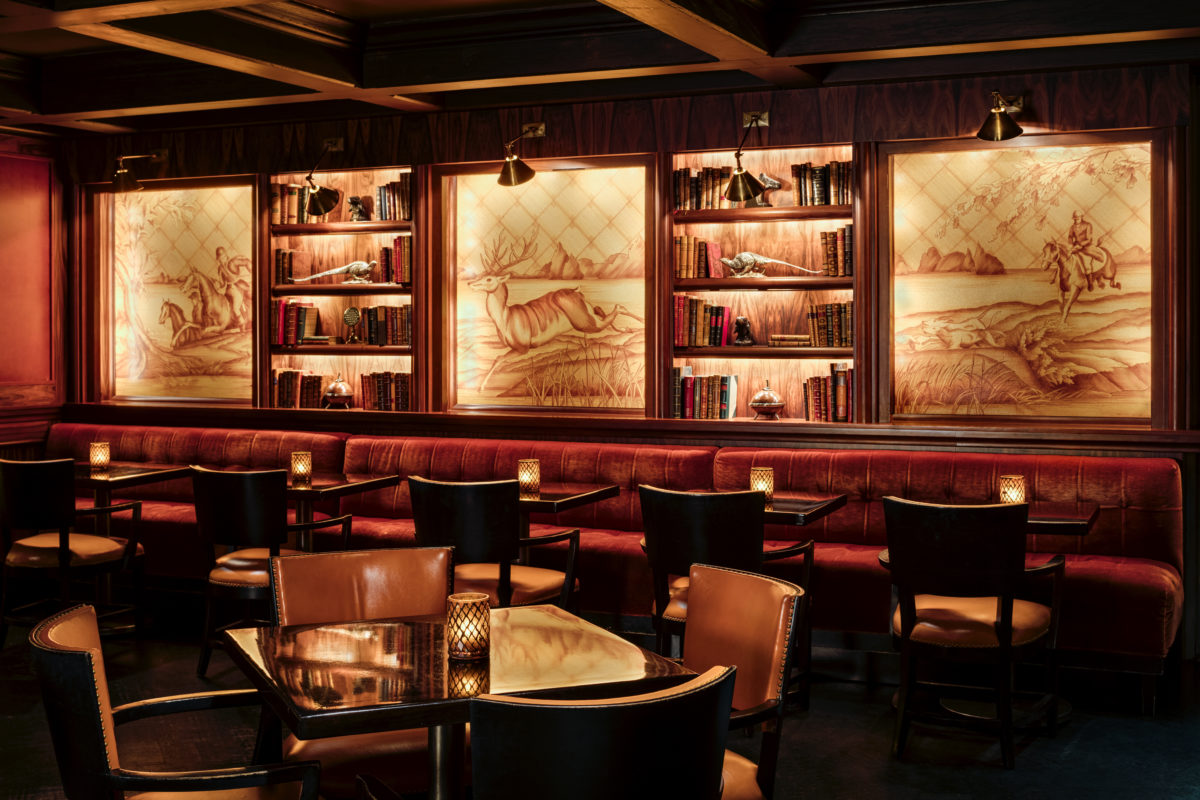 An opulent atmosphere mixes well with excellent craft cocktails and bar snacks at The Mansion Bar.

Tucked underneath the uberhip Joule Hotel in Downtown Dallas, The Midnight Rambler crafts inventive Texas Tiki-inspired cocktails and bar bites in a cozy-chic interior. It’s the perfect spot for a night out downtown for locals and visitors alike.

The Rosewood hotel bar in Uptown would be all about the mansion-style Texas opulence if it weren’t for the expertly crafted cocktails and live jazz on weekends. The bar food menu takes influence from the Lone Star State with items like Mansion Chili and shrimp tacos.

This neighborhood lounge serves up a variety of craft cocktails with inventive names and ingredients (try the Back Dat Cass Up or the Blu-Tang Clan). Enjoy your drink in the cozy interior or outside on the patio. It’s the perfect place to unwind after a busy day shopping and eating in the Bishop Arts District.

→ Find out the best places to stay in Dallas. 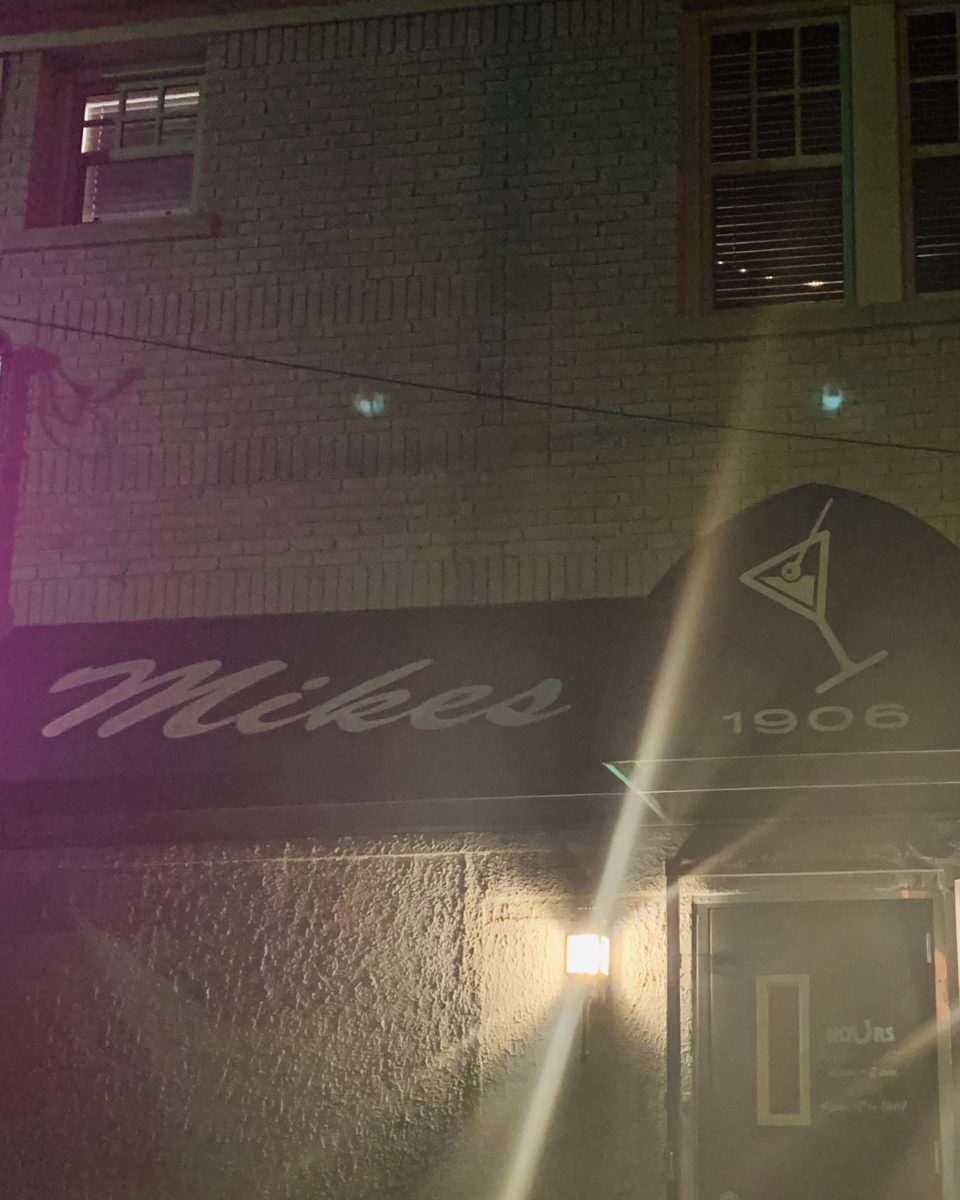 Mike's Gemini Twin doesn't look like much from the outside—and that's the point.

This Lower Greenville dive is unlike any other bar you’ve been to. It’s funky retro interior meets late-night Vietnamese food and pizza, and it’s where local chefs like to hang out after their shift (just ask Khao Noodle Shop’s Donny Sirisavath). Cosmo’s is the perfect last stop after a night out in Lower Greenville or Old East Dallas.

Located in the still up-and-coming Cedar’s neighborhood, south of all the fuss up in Deep Ellum, Mike’s might compel you to lament, “They just don’t make ‘em like this anymore.” Only they did, just last year. This dive is old school through and through, but it’s also the new hip local hangout. With vinyl booths, strong drinks, and quirky bar food (pickled sausages?!), you’ll forget what year it is (or how late into the night it’s gotten). Make friends at the dart board or pool table—and ask them for their other Dallas recs—and then marvel at the Dallas skyline as you stumble into your Uber ride home.

This Deep Ellum dive has been around since 1963 and is locally famous for their burgers and live country music. The digs are the definition of low-budget dive decor—stickers and writing on the walls, string lights, and neon beer signs. It might look like a seedy wateringhole from the outside, but the inside is full of heart and friendly locals. 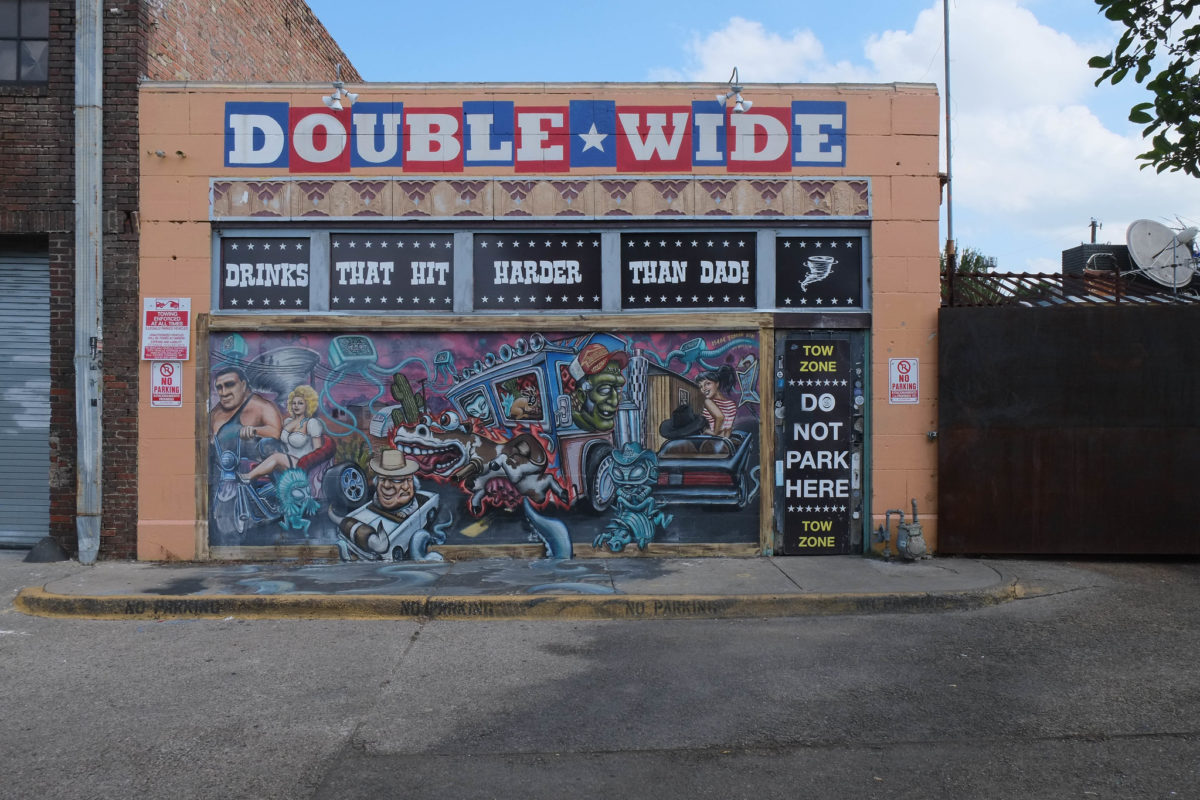 Double Wide Bar lives up to its name and then some. 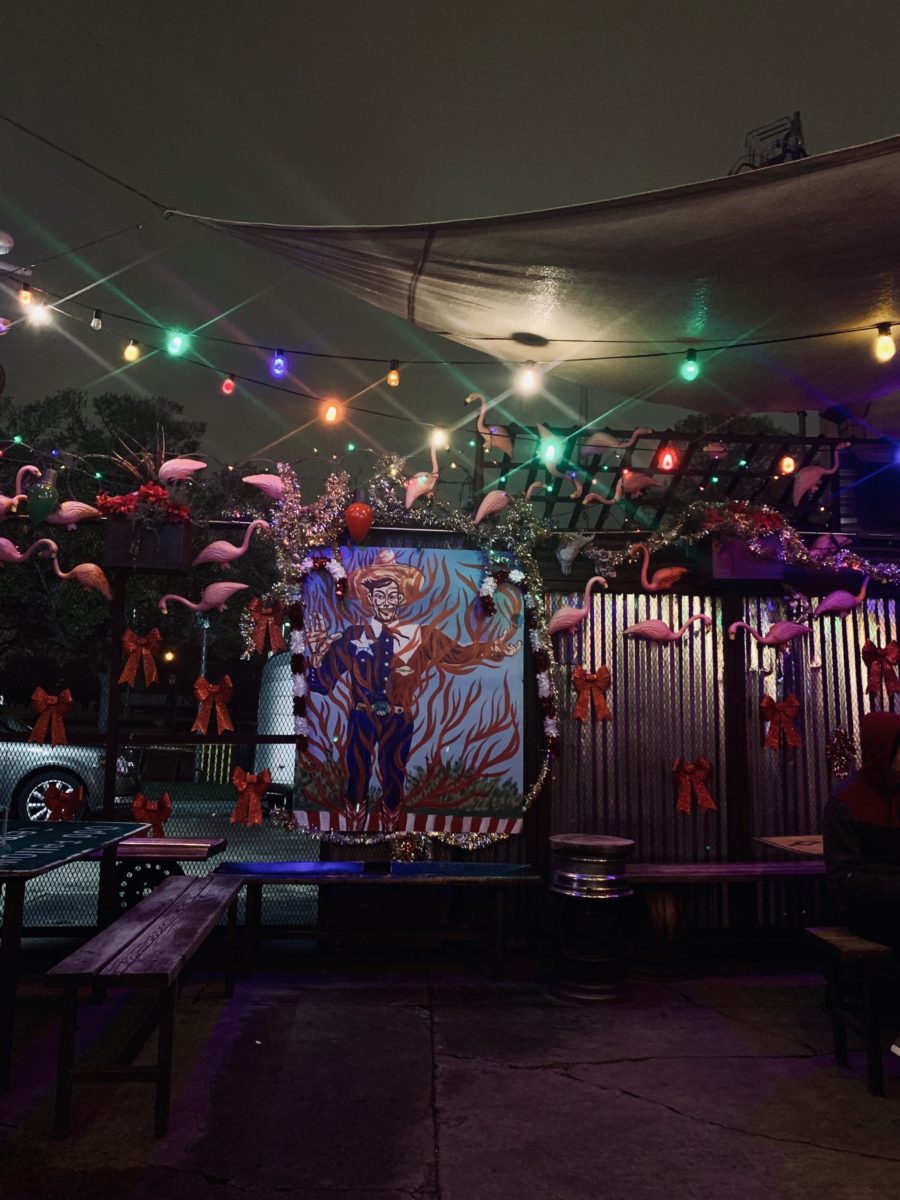 The outdoor hangout at Double Wide for when you need a break from live music.

The name may be precarious, but it’s a clue that this honkey tonk is much more than meets the eye. The South Dallas bar’s doors have been open for over 50 years, and its current owners have elevated the menu with local craft brews and seasonal, melt-in-your-mouth bar food (don’t sleep on the onion rings). There are plenty of wood benches for large groups but also enough space for two-stepping to the live band. It’s a quintessential Texas honkey tonk experience and then some.

On the east side of Deep Ellum is a bar bursting at the seams with personality—old art and signage line the walls, abandoned toilet seats are available for seating, and the signature drink is something called a Yoohoo Yeehaw (it’s amazing). Top that off with/ DJ and live music performances, and you’ve got a Dallas bar that redefines the honkey tonk. You can also check out their sister restaurant, Single Wide, in Lower Greenville.

→ Find out the best things to do in Dallas. 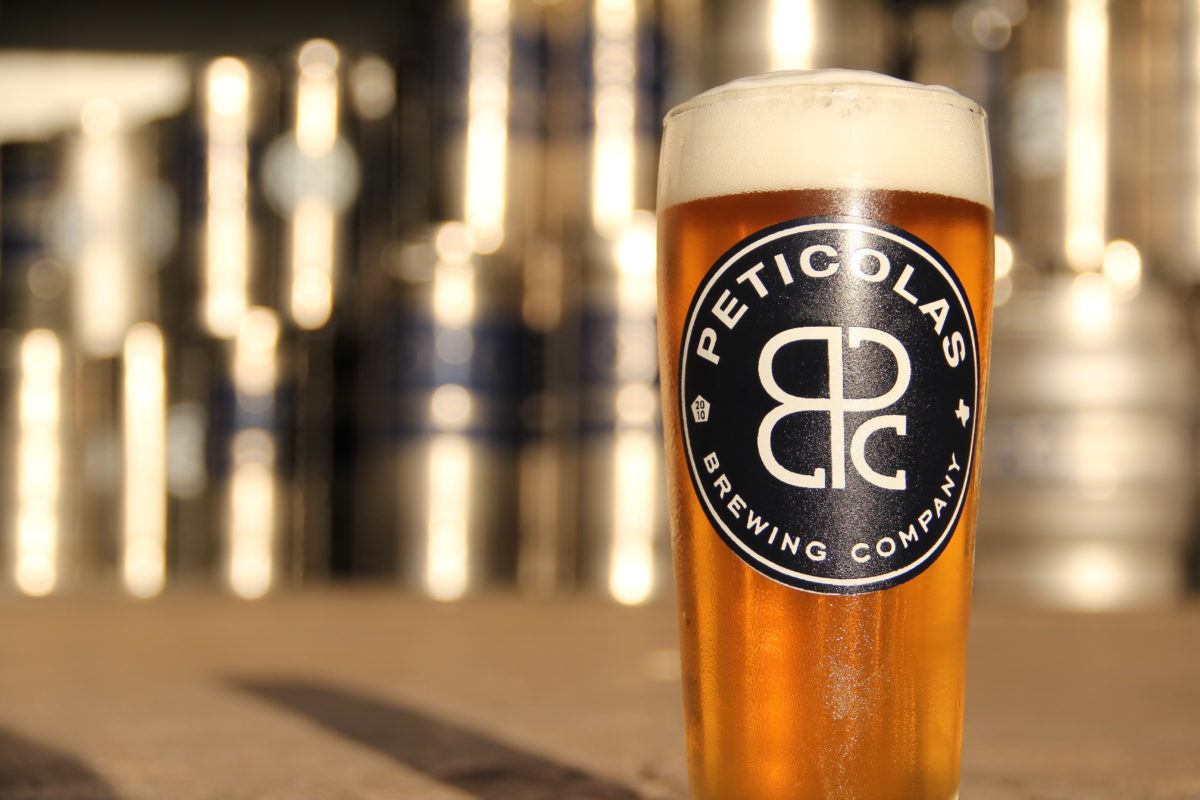 The Peticolas Brewing Company took home the the Grand National Champion title at the U.S. Open Beer Championship in 2018.

The beers at this family-owned, award-winning brewery can only be found on draft. With up to 18 selections, including a nitro tap, traditional cask ale, and fruited beers, the three-level former warehouse in the Dallas’s Design District is a great place to hang out and sip them all. There’s foosball and ping pong tables to complement some of the best beer in the state of Texas.

The expansive indoor-outdoor space at the Foundry will keep you busy all night. Sidle up to the bar and have the bartenders pour you local craft brews. Take it outside to enjoy the wood benches and live music under string lights and swaying pecan tree branches. They also own the Chicken Scratch right next door, which serves—you guessed it—fried chicken and other bar snacks using only local ingredients.