There’s more to Colorado than Aspen. The Centennial State is home to dozens of scenic towns nestled among the Rocky Mountains, perfect for your next road trip.

With the highest average elevation of any U.S. state, Colorado’s Rocky Mountains are interlaced with 26 scenic and historic byways—more than in any other state—that emerge in the spring like bluebells at snowmelt. As a national leader in sustainable tourism, Colorado just completed fitting out seven of these spectacular two-laners for electric vehicles, with others coming online soon. And whether you are road-tripping by Prius or pickup, getting off the beaten path in the Rockies means discovering the independent small towns that anchor these byways. From off-roading to opera, wine tasting to cemetery crawls, engaging with these communities reveals a Colorado culture that thrives away from the slopes.

Laid back Basalt is the Berkley to neighboring Aspen, the gingham to Aspen’s chrome. It’s also the ideal basecamp for exploring Roaring Fork Valley after motoring over the continental divide via the Independence Pass scenic byway. In Basalt’s historic old town, visit The Art Base community gallery and education center for the latest exhibitions by Colorado contemporary artists. Across the street, in the circa 1896 Railroad Hotel and Saloon building, sample Madrid-style tapas and sip local Marble Distilling Co. spirits on the front patio of Tempranillo Restaurant, a local favorite since 2006. Pick up provisions at Skip’s Farm to Market, sleep at The Basalt Mountain Inn, and check with the locals who run Taylor Creek Fly Shop about the best fishing holes in the Gold Medal waters that converge in Basalt, Colorado’s “Town of Two Rivers.” 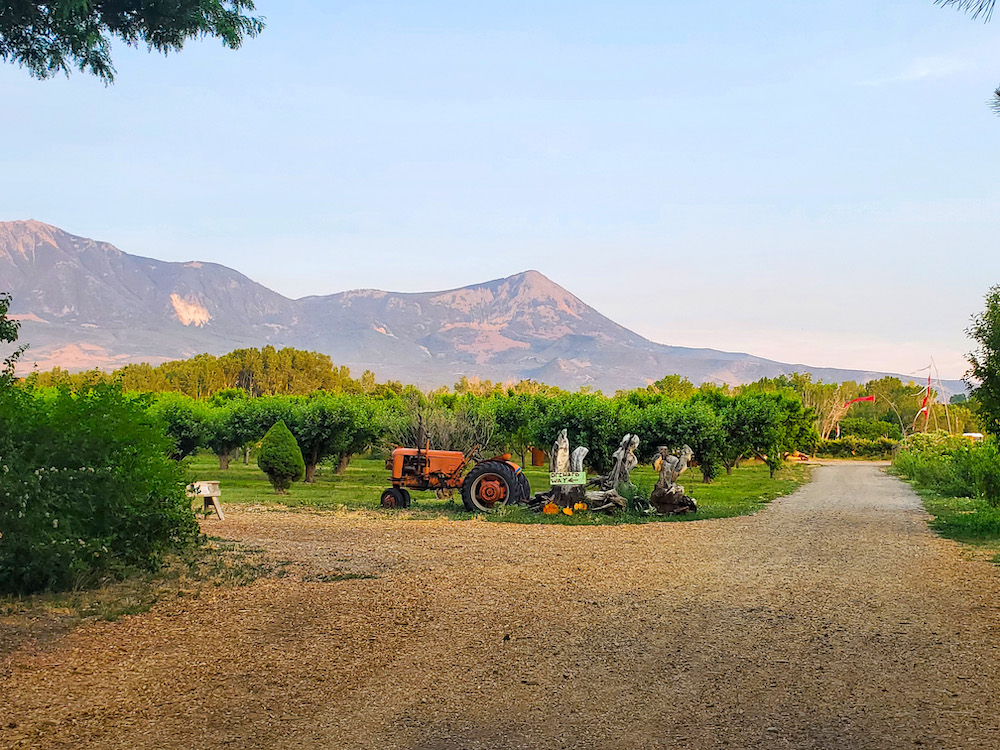 Several spectacular backroad byways converge around this unpretentious farm town that anchors Colorado’s organic agricultural heartland. Located at the base of Grand Mesa, the largest flat top mountain in the world, Paonia is your base for visiting wineries like The Storm Cellar of the West Elks AVA—the state’s newest official wine region—plus home to a thriving art scene centered around Everywhere Studios, a funky downtown artist studio and residency. As if that weren’t enough, the town is also a favorite stop for musicians on the mountain tour circuit. Start by pitching your tent (or reserving a cabin) at Big B’s Delicious Orchard and fueling up with the cafés clean home cooking (save room for the seasonal fruit pie). On summer Friday nights, dance under the stars to local bands playing from the orchard’s outdoor stage. Or, head to Zenzen Organics where the owner, who has been growing hemp and offering farm tours since 2016, has converted her flower-filled barnyard and adjoining field to an outdoor summer music venue. 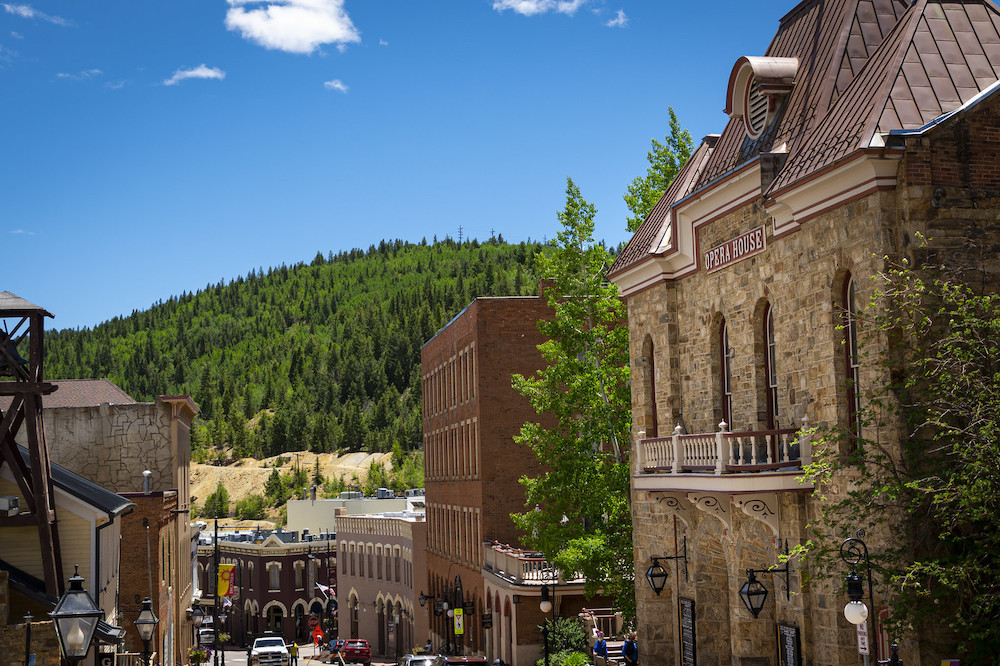 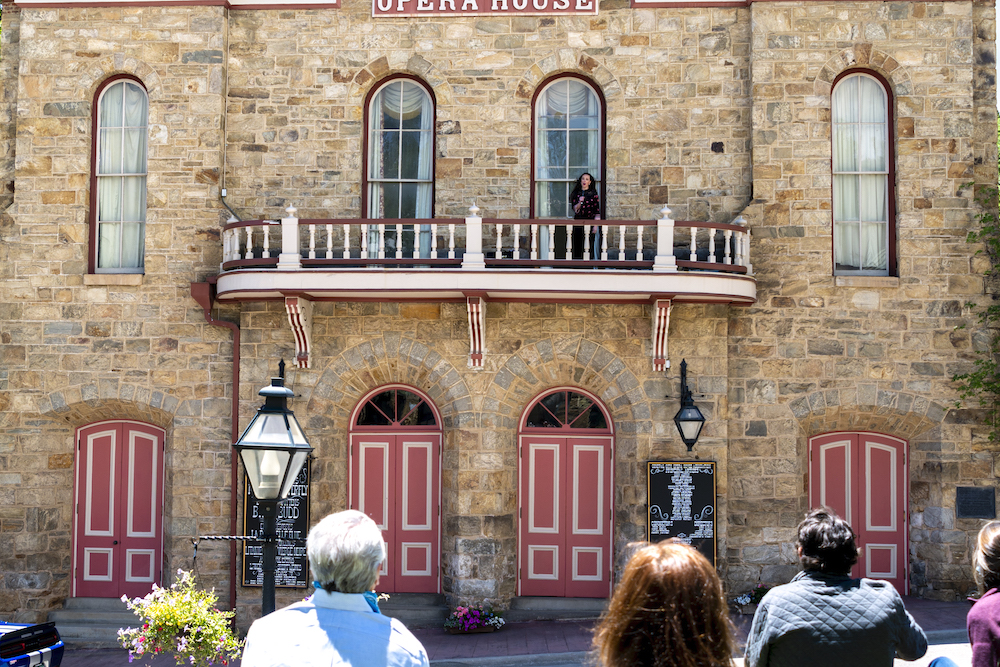 The Central City Opera was founded in 1932 and is the fifth oldest professional opera company in the US. Photo courtesy of City of Central.

The frozen-in-time façade of this Victorian-era gold rush boomtown that once rivaled Denver makes a lot of sense. Because Central City is a place where nationally-renowned performances in the 19th-century opera house meet cemetery crawls featuring costumed locals re-enacting tall tales from their area’s colorful past. Other events include the annual “Paranormal Night With the Spirits” at the adorable (and, it goes without saying, quirky) Gilpin History Museum, home of the Nautilus—Colorado’s original (and only?) hand-cranked submarine. Imbibe in more local history at family-owned Dostal Alley Saloon and Casino, where the award-winning beer is made from wild hops planted by local brewers decades ago. And, around the corner, the rough-and-tumble former frontier town’s original hotel, the Teller House, is now Face Bar (there’s a juicy story behind the name) and JKQ BBQ. Head into or out of town via the Peak to Peak scenic byway.

When the call of the wild becomes irresistible, the most remote town in the lower 48 states answers. Begin your adventure in Ouray—Lake City’s better known “big sister”—by pointing your four wheel drive vehicle toward the Alpine Loop Scenic and Historic Byway, a network of 4×4-only roads linking the 12,000-foot mountain passes that drop you into Lake City via Hard Tack Mine, the ideal place to get under the surface (literally) of the area’s notorious gold prospecting past. For a more celestial view of this International Dark Sky location, check out the guided nighttime tours by Lake City Skies, a local community of sky watchers, stargazers, and amateur astronomers. Test your trivia at Lake City Brewing Company’s Tuesday night events, go for live music on Saturdays, or fill up on the kitchen’s gourmet hot dogs and deviled eggs before an ice climbing session at the top-rated municipal ice park nearby. Catch a movie at the family-owned Mountaineer Theatre before bedding down at the Matterhorn Motel, a Lake City stalwart since 1949. 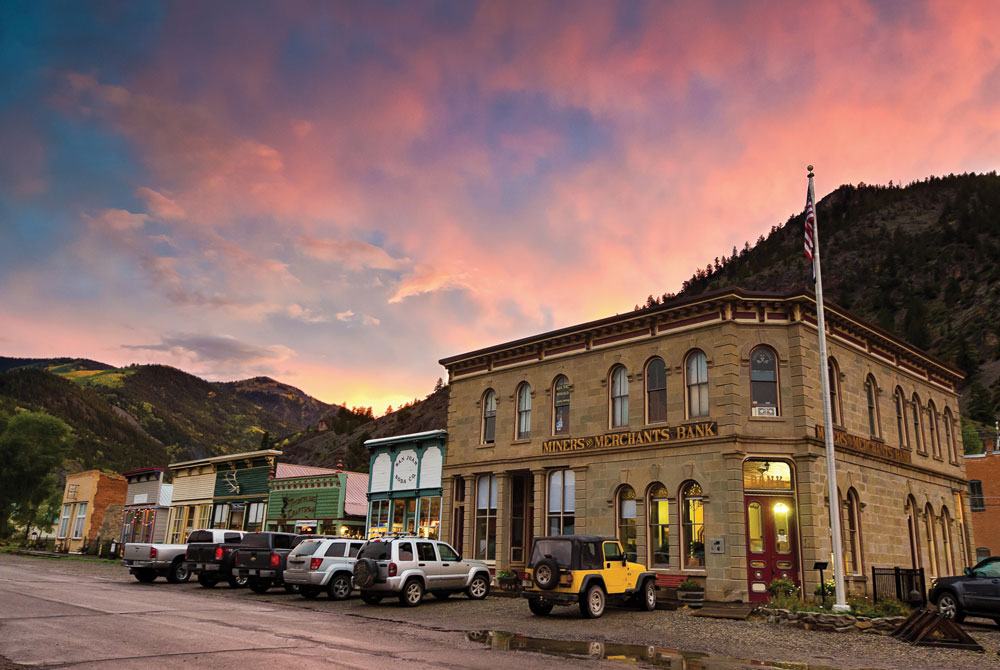 Creede is home to a population of only 700, though they have the largest percentage of National Forest territory of any Colorado county. Photo courtesy of Michael Underwood via Creede/Mineral County Chamber of Commerce. 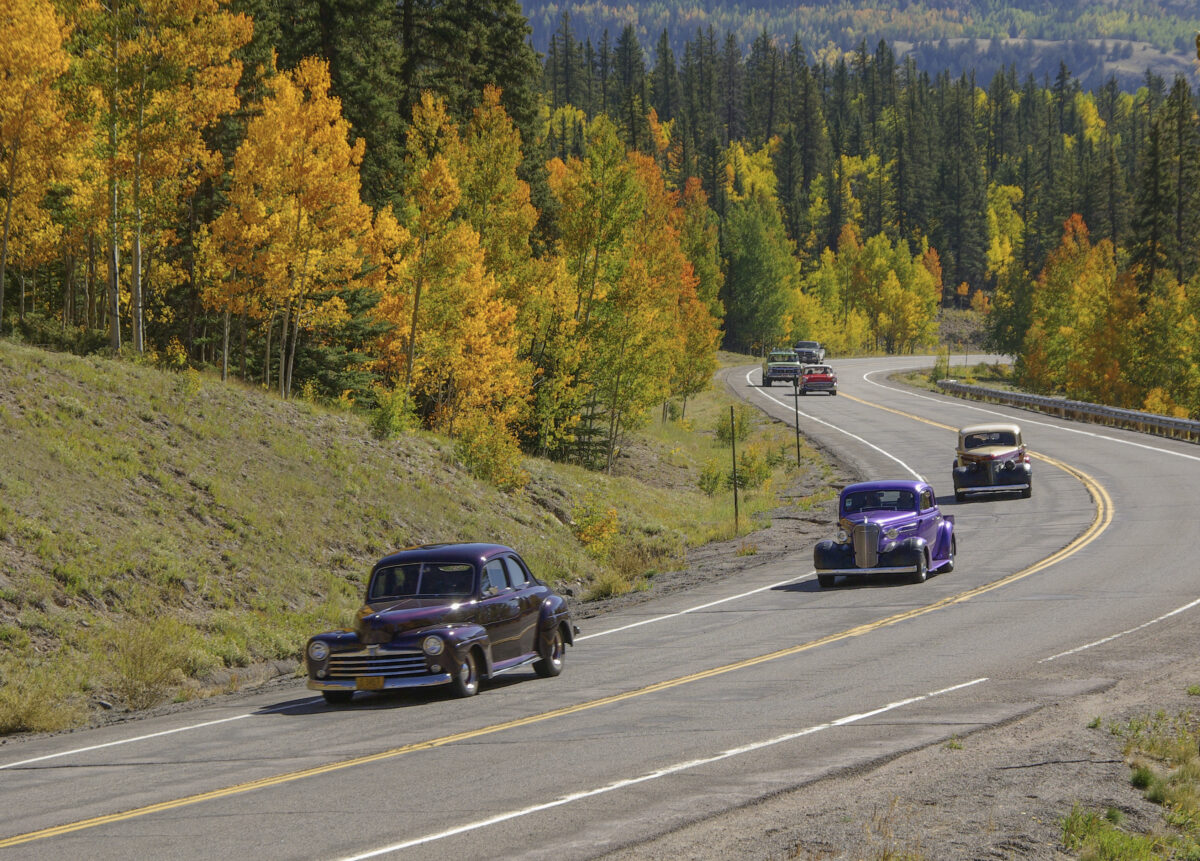 One of Colorado's many scenic byways. Photo courtesy of Bob Seago via Creede/Mineral County Chamber of Commerce.

Another little mining town that refused to die when the mines closed, Creede has become a destination for world-class summer repertory theatre rooted in community involvement.

Since its humble beginning in 1966 with a $32 donation from the local US Junior Chamber, the Creede Repertory Theatre has become the largest summer employer in town, reaching 32,000 young people through its robust theatre outreach program. If you don’t want to be among the 20,000 theatre-goers each summer, though, consider road tripping to Creede in September, when the aspen forests that line the Silver Thread Scenic Byway transform the mountainsides into a golden haze. Between Creede and the byway turn off, stop at Rachels Keep On Keepin’ On for breakfast, fair trade coffee, or daily lunch specials ranging from pulled pork with southwest slaw to chicken gumbo. Strike up a friendly conversation with the bartender of Tommy Knocker’s Tavern to learn about the latest community happenings, or order “the Tommyknocker’s” famous ribs and catch some live music in the establishment’s 1890-era locale. Local outfitters San Juan Sports and the Rio Grande Angler also have year-round bars and coffee shops, respectively, that are popular with locals and out-of-towners alike. 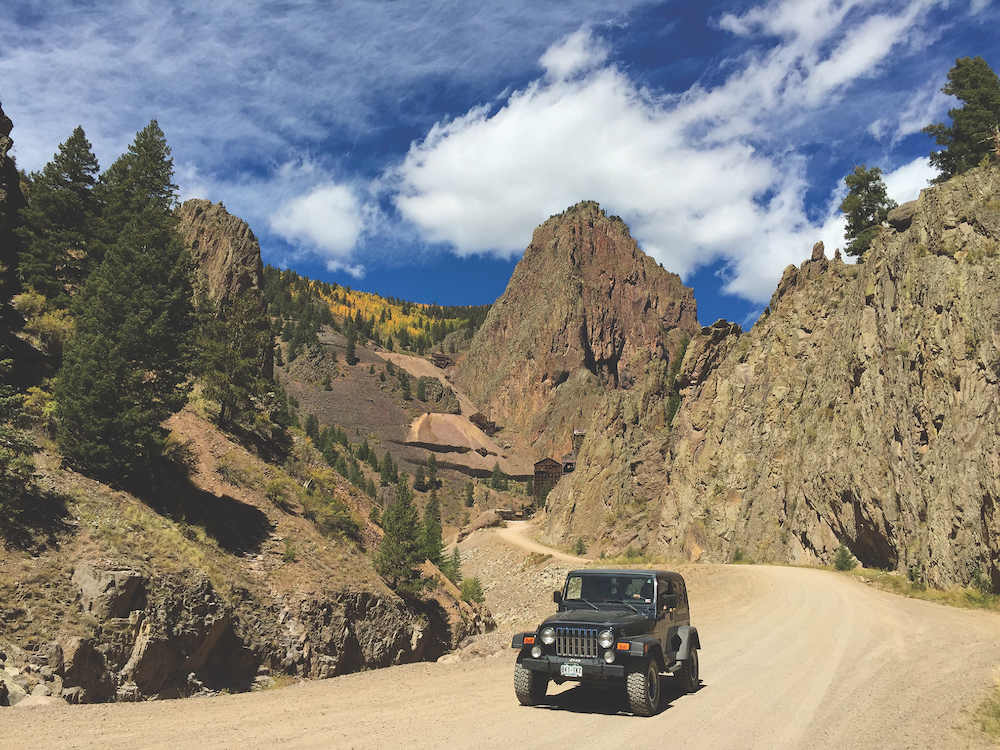 Transport yourself to the Old West with a scenic drive along Creede's Bachelor Loop. Photo courtesy of Creede/Mineral County Chamber of Commerce.

If the rolling valleys and fertile pastures surrounding Clark, a cowboy town near the Wyoming border, have you humming “home, home, on the range,” point your wheels toward one of the area’s working ranches like Elk River Guest Ranch or head for nearby Routt National Forest’s 2.9 million acres of wilderness. Another option, Steamboat Lake State Park, has nearly 200 campsites and cabins to choose from along and around the shores of this vast mountain lake. And whether you’re saddling up for a ride with Del’s Triangle 3 Ranch or sporting snowshoes, the Clark Store and Hahn’s Peak Roadhouse are year-round community hubs for chow and recreation. To learn how winter sports have shaped the region since North America’s oldest operating ski area, Howelson Hill, opened over a century ago, check out the new tour that provides a glimpse into the past through the stories of the nearly 100 Olympians who trained—and train—at Howelson Hill’s iconic Steamboat Springs Winter Sports Club.