We Are All Immigrants: A Venezuelan Chef Supports Women In Food After Seeking Political Asylum

Welcome to “We Are All Immigrants.” In this series, we highlight the stories of people who live around the world but remain connected to their home countries. You’ll hear from those most acutely affected by changing policies and a shifting reality, those who exist as part of multiple cultures at once.

Adriana Urbina is a three-time winner of the Food Network’s hit series Chopped. But her path to becoming the only Latin female chef to win the Chopped Grand Championship wasn’t exactly what she had planned. Born in Caracas, Venezuela, Urbina fell in love with food on a trip to Paris at age 12 and later studied at top international culinary programs in France and Venezuela. She then served as an apprentice under Spain’s 3-star Michelin chef, Martín Berasategui.

But as political struggle increased back home, things got tense for Urbina’s family—especially after her mother, an urban planner, spoke out against the government on the radio. In 2013, Adriana made the difficult decision to leave her home country for good and seek political asylum in the U.S. Both she and her family are now safe, and Urbina has been making her mark on the New York City culinary scene ever since—working her way up through various kitchens before launching a successful pop-up and private dining company, as well as landing the executive chef role at James Beard-award winning De Maria (now closed).

Here, Urbina shares what it takes to make it as an immigrant chef in the U.S., and how she’s using her culinary expertise to shine a light on important causes—most recently, her pop up called The Table, in partnership with Women’s March co-founder Breanne Butler, is designed to showcase women in food, giving them a platform to grow their careers and develop their talents. 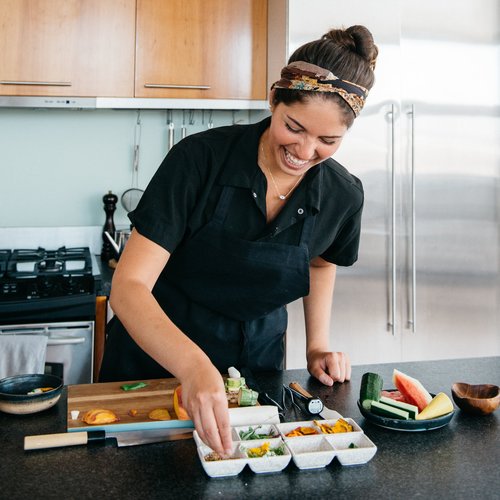 Tell us about your pop-up series, The Table.

I’ve always found that it’s very hard to find female chefs or executive chefs or women-owned businesses, so I wanted to give women all the tools to highlight their talents. The Table is a platform for women so that they can build the network to start their own restaurants. Every week, we’ll have a different female chef, and everyone that’s involved—from servers to winemakers to ware-makers—are going to be female. So we’re starting in New York and then we’re going to expand it. Eventually, we want to make it a “chef’s counter,” but chef’s counters are typically more like fine dining. This is meant to be approachable for everyone.

They were so talented, but they didn’t believe in themselves.

What inspired you to start this pop-up?

At my last job I had a lot of female cooks with me, and they were so talented, but they didn’t believe in themselves. I would say, “Do you want to do a pop up?” and they would be like, “Me? A pop-up? What?” A lot of female chefs, including myself, need that support or that push to feel like they can do it. I didn’t get to where I am because I’m so special, but because I put in the work and I had people behind me that believed in me. I want to do that for other female chefs.

I feel like what inspires me the most are people who are at the top of their careers, but are still willing to do the work. They’re willing to be very humble and inclusive and even take the garbage out. In my field, that’s what I admire the most.

When did you first start cooking?

When I was about six or so my parents started to encourage me to cook. Little by little they gave me books and things like that, so I started baking cookies that I sold in our apartment! I used a lot of fruits like guava and mango and other weird stuff—at the beginning the cookies were not very good. But I started practicing, and my dad cooked a lot—he always encouraged me to cook with him—so it was very natural for me to be in the kitchen

I’ve had to find creative ways to use the ingredients that are available to me.

How has travel influenced you as a chef?

I always loved cooking, but eating is something else entirely. My first trip out of the country was to Paris at age 12 to visit one of my best friends. It was one of the most beautiful trips I’ve ever been on. She had a house in Provence as well, and I ate so much delicious food. I think that’s when I started getting into food for eating. The butter I had there—it was so different from what I was used to, and I found that very inspiring.

Has your cooking style had to adapt since moving to the States?

I’ve had to find creative ways to use the ingredients that are available to me. It’s difficult to get things like passion fruit and other tropical fruits—you can find them but they’re very expensive. I try to embrace the seasons here and use ingredients that I’ve never worked with by connecting them with my tradition and my heritage.

Being an immigrant is the best thing that ever happened to me.

How has your experience as an immigrant influenced your professional cooking career?

I feel that being an immigrant is the best thing that ever happened to me because it pushed me to prove myself. It’s very hard to be a female immigrant. People didn’t have the patience to understand me when I didn’t know English very well, so that pushed me to be like, “OK, I want to prove that I’m the best or work on the things that I’m not so good at so I can get where I want to go.” Being an immigrant pushes you to be better, to inform yourself, to educate yourself.

What are some challenges you’ve faced in the food industry as an immigrant?

Every day comes with a challenge. The way that kitchens work here is totally different than from Venezuela or Europe even. For example, in the U.S. they have a station for each thing—a station for fish, a station for salads, etc.—and that’s not how kitchens work in Venezuela. So on top of learning new ingredients, it’s also learning the system.

I know how to work under pressure or in a crisis better.

How did working in Venezuela and other international kitchens influence your cooking style?

Well, they’re very disorganized in Venezuela! Not all of them, but it’s very different. Even when you they read the paper with the upcoming orders, in Venezuela they mark it with different numbers. In Spain they have this whole chart system with each food station. But because of all this, I know how to improvise. I know how to work under pressure or in a crisis better. Like when we when we have a problem I’m like, “OK, everyone calm down, I got this!” Because I lived in this crazy country where you have to go with the flow.

What do you miss the most about Venezuela?

The most important thing that I have is my heritage.

It’s such a rich country—the weather’s perfect. Anything you can imagine, you can grow over there, from vegetables to the best coffee and rum. I always loved to travel, but I never imagined myself living somewhere else. The most important thing that I have is my heritage, and so I always want to cook food that incorporates my heritage, influences from my travels, and is approachable to everyone.

Will you ever be able to go back to Venezuela?

Since all the work with the pop-up dinners and the Food Network, I was recently able to get an O-1 Visa [ed note: the O-1 Visa is non-resident US visa for people who demonstrate extraordinary ability in their field] and so now I’m going to be able to go back for the first time in seven years because the restrictions are different than for political asylum grantees. I have a trip planned already and I’m very excited.