Artists in Barbados Reveal the Beauty of Negative Space

Visual and performance artist Sheena Rose's neon green hair stands out against the colors of the buildings in Speightstown, Barbados.
DispatchEmma Glassman-HughesKyle Babb

Sheena Rose doesn’t drink or smoke. The 32-year-old Barbadian contemporary artist and Fulbright Scholar doesn’t like the sensation of losing control over her body.

Still, even the teetotalers among us need to let loose every now and again. Over lunch, with steel drum covers of “Under the Boardwalk” and “Y.M.C.A.” playing in the background, Rose upgrades from water to a virgin piña colada. “Are you sure you’re a virgin?” our waiter asks wryly after Rose places her order. Uncomfortable with the unexpected sexualization, she fires back. “That’s inappropriate. Can you just bring me my drink, please?” The waiter continues with his joke, but Rose clearly isn’t looking to flirt. “Other people might have laughed that off because they don’t want to make a scene,” Rose says of the altercation, “but I’m not afraid to be honest.”

Befitting the circumstances, Rose has just finished telling me about how fearless honesty has characterized her work since attending art school at Barbados Community College in her late teens. Her brusqueness as both a Caribbean woman and a Caribbean artist has a tendency to stun. “My honesty draws people’s attention,” Rose says. “I don’t hold back. I say what I want to say. It makes people uncomfortable to hear the truth.”

The tourist-friendly soundtrack playing around us may be stale, but nothing about the woman sitting across from me at our beachside table follows suit. Her radioactive green braids refract in her glass, and her indigo-lined eyes blink and bulge in time with the retelling of her story. Having completed artist residencies all over the world, from Florida to Cape Town, Rose has become the international artist she dreamed of being when she was in school. And yet it’s really her experience as a Barbadian—and her feelings of never quite fitting into that role—that inform her work and the way she interacts with the rest of the world.

As an introverted schoolgirl who was often found scribbling dramatic comics (Rose remembers them as “soap operas”) in her sketchbooks, she was bullied by peers who deemed her strange. It’s been this outsider complex that has guided Rose’s self-exploration and given her the ability to block out the opinions of critics in favor of finding her own voice as an artist. “My freedom comes from not caring about what people think about me,” she says.

The sensation of being othered was only heightened as she fulfilled her Fulbright grant at the University of North Carolina at Greensboro, where she studied studio art. Rose says she felt like a “monster,” as though her accent and her foreignness intimidated her peers. “I wasn’t American, I wasn’t African American,” Rose explains. “I experienced culture shock while I lived there. I discovered through being there that I’m a black woman from Barbados.” And yet her return to Barbados was hardly a perfect homecoming—her artistic approach had grown continually more raw, further isolating her from the conservative culture at home. 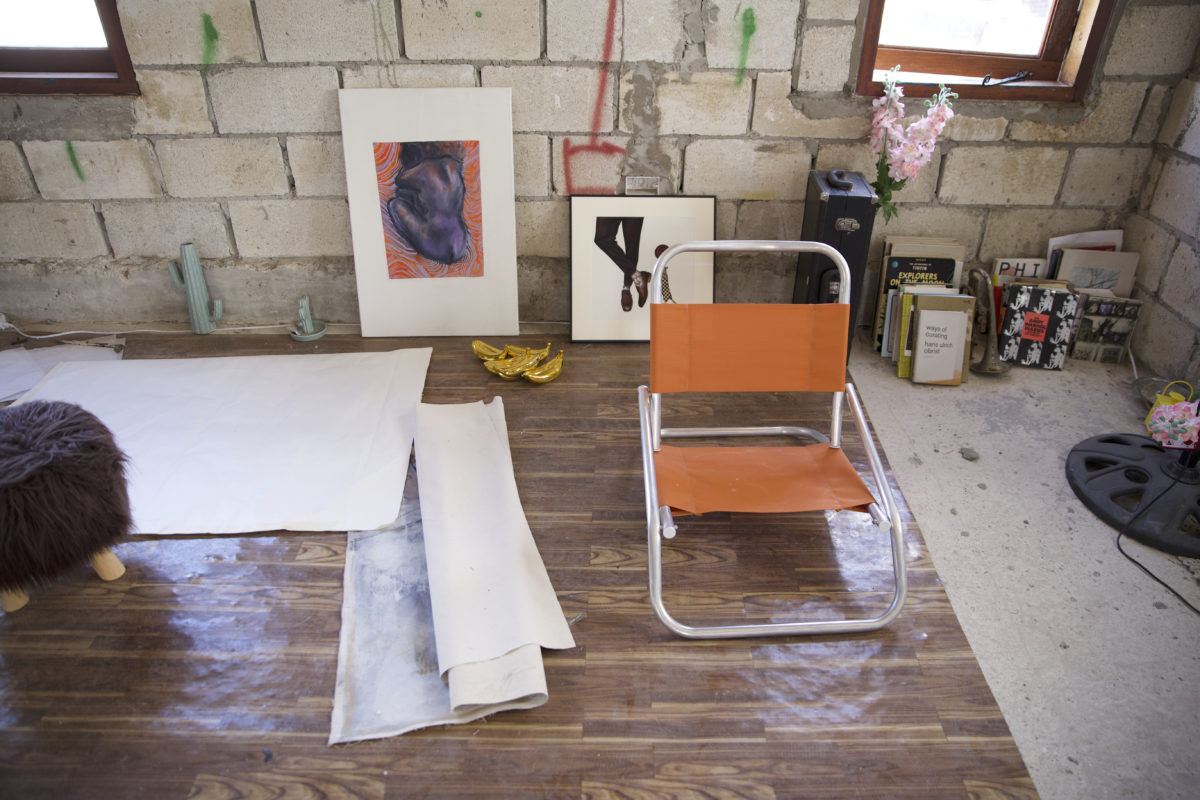 Sheena Rose's studio is located above a dentist’s office in Bridgetown, Barbados. 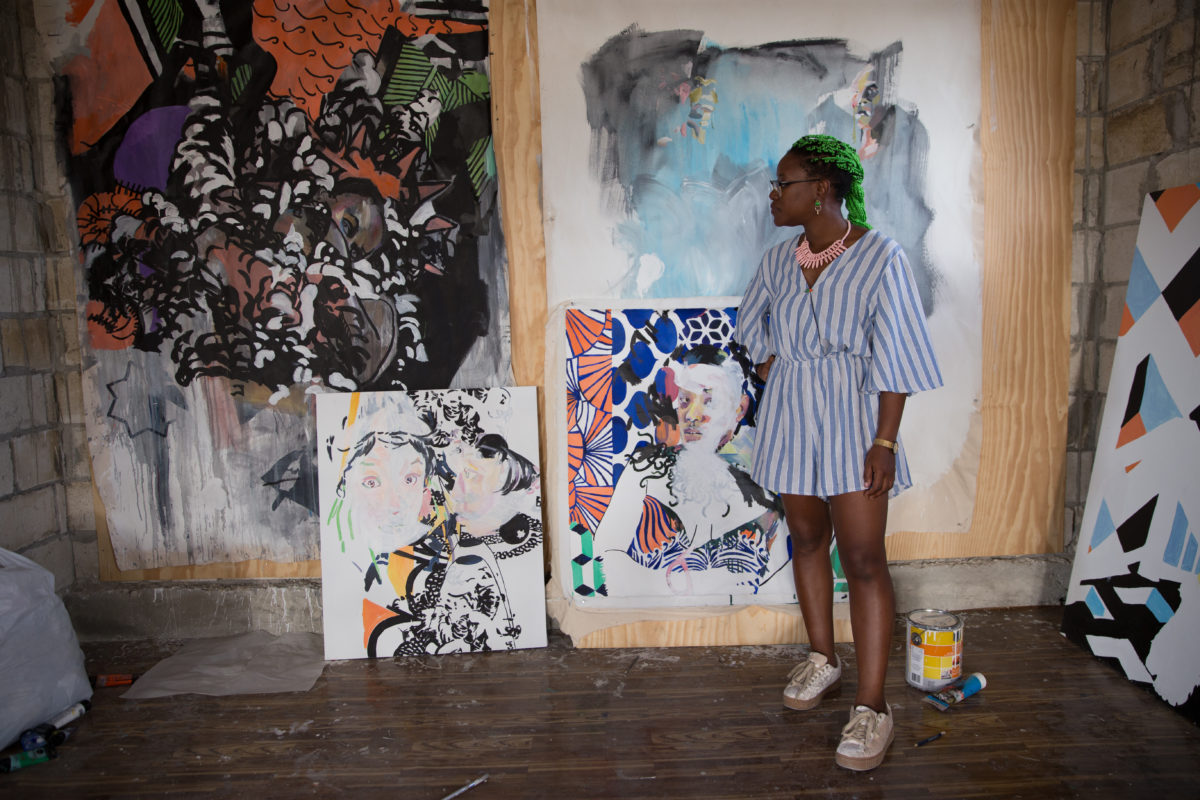 Caribbean art has long been seen as purely decorative, characterized by paintings of sand, sun, and palm trees. In the global imagination, the Caribbean is a land of accommodation. But the contemporary artists of Barbados, Rose included, show no intention of remaining quiet or subservient. Now on the balcony of her studio, a sprawling and dusty attic above a dentist’s office in Bridgetown, Rose reflects on her place in the growing movement. “We don’t have a national art gallery, so I feel strongly that people need a space to celebrate art and to see ourselves in art,” she says. She opens up her studio for community shows, the most recent of which was called “Contemporary Art, Contemporary Issues.” Additional supportive infrastructure is gaining momentum in Barbados, too.

Beneath the cover of wide-leafed trees, Fresh Milk operates out of a wooden bungalow next to founder Annalee Davis’s teal-painted family home. While the name Fresh Milk alludes to its location on a functioning dairy farm, staff members at the arts platform are forthcoming about the history of the land plot—specifically its former identity as a sugar plantation, which often factors into group discussions about the reclamation of space. Visual artist and writer Katherine Kennedy has been working at Fresh Milk since 2012, a year after it was founded by Davis, a Barbadian professor and artist. Davis’s work featured prominently in the 1990s, when contemporary arts were beginning to find footing in Barbados. What started as an experiment for recent art school graduates on the island, Fresh Milk is now a gathering space for panels and discussions, and offers residencies to both international and local artists. It’s unique in part because it’s not a commercial enterprise. “We’re not so much focused on the sale of art,” Kennedy says. “We’re here to provide a support network for the young artists.”

Rose included, these contemporary Barbadian artists experience a sort of alienation both at home and around the world, where their confrontational work is sometimes interpreted as threatening or aggressive. “There’s a fear of offending the tourist, of being too honest and making the tourist feel in some way responsible for colonialism,” Kennedy says. The work of many contemporary Bajan artists demands a willingness to think critically about the individual’s role in globalization; hardly the sort of escape tourists traditionally seek.

Adam Patterson, who works part-time at Fresh Milk, believes that Bajan people and culture have been misclassified as subservient.

“We’re not docile people,” the soft-spoken Patterson says. “A lot of the language used to describe this region is based in this tropical fantasy, this idea of consuming paradise. That is very dangerous. That kind of language establishes a hierarchy; it says that the visitor takes precedence, and the local is just food to the visitor. The formation of that kind of relationship is problematic, but tourism itself doesn’t have to be problematic. It’s about holding people accountable in a productive way. It’s not so comfortable, but it’s honest.”

As a student of the fine art program at Central Saint Martins in London, where he recently graduated, Patterson produced an immersive cooking class in conjunction with the Tate Modern called “You’re Too Sweet,” which used a recipe for sugar-coated tamarind balls to examine the history of the sugar trade. And while all the artists I spoke with are quick to point out that not all contemporary art coming out of the Caribbean must necessarily tackle questions of race, culture, and history, they are clear that there must be space for the more controversial work that is produced. Fresh Milk is one such space.

“Coming home to a context and a country that isn’t so accommodating to the arts on an institutional scale, Fresh Milk provided a platform for me to continue growing as an artist,” Patterson says.

Kennedy highlights the work of individuals such as Rose and other operations like Punch Creative Arena, an extension of Barbados Community College, noting that the advancement of the arts here is a group effort. “Fresh Milk is not working in isolation,” Kennedy says. “A collaborative mentality is important if we want to continue to push the arts forward.”

Last year Rose was invited to the Royal Academy of Arts in London to perform her piece “Island and Monster,” about two separate identities that are in conversation within herself. From her iPhone, propped up against a roll of duct tape in her studio, she shows me a 12-minute recording of the performance. Eight or nine minutes into the video, the monster cries out to the audience: “I feel stranded!” Here in Bridgetown, as she watches her own performance, tears well up in her eyes. This work is lonely and aching, and spending the afternoon with her—though her smile is effusive and her eyes bright—I get the sense that she must be, too. “Coming back home now, I still feel Bajan, but sometimes I feel a sense of displacement,” Rose says. “I’m trying to understand myself again in this space. I don’t like the word ‘alien,’ so instead, I see myself as an astronaut, going from place to place. Each time I leave somewhere, I see the airplane as a rocket taking off, taking me to another planet.”

Much like the island she calls home, Rose is as beautiful as she is misunderstood. And though her independence is commendable, it’s her community—small yet growing—that pushes her forward.