Where to Eat, Stay, and Hike in Australia’s Blue Mountains

Just over 30 miles outside of metropolitan Sydney, the Blue Mountains are actually comprised of a number of distinct mountain ranges. Unfortunately, since the 2010s, the area has been subject to devastating brush fires. Photograph courtesy of Blue Mountains Botanic Garden.
IndexAlly Betker

In New South Wales, Australia, the Blue Mountains beckon, hosting flora, fauna, and geographical diversity unlike anywhere else in the world.

You’d be forgiven if you spent a trip to Australia hugging the coastline, visiting the Great Barrier Reef, the Opera House, and the world’s best beaches (yeah, we said it). The country’s diverse interior may not make the top of a traveler’s list, but the Blue Mountains National Park, just a 70-mile drive from central Sydney in New South Wales, is worth a day or two in the itinerary. The UNESCO World Heritage Area spans 3,900 square miles and is home to a wide range of habitats which contain over 400 types of animals including koalas and spotted-tail quolls, and rare plants such as the Wollemi Pine.

Make a loop around the mountains for your tour, driving from Sydney along the Great Western Highway and returning via Bells Line Road, which was badly impacted by the 2019 bushfires. (The Blue Mountains Road Trip was created in response to the bushfires to support local businesses, and is in general a great resource for the area). This route offers a glimpse into different areas of the park as well as quaint mountain towns, for a trip that combines outdoor adventuring, cider brewery hopping, and locally produced fare. 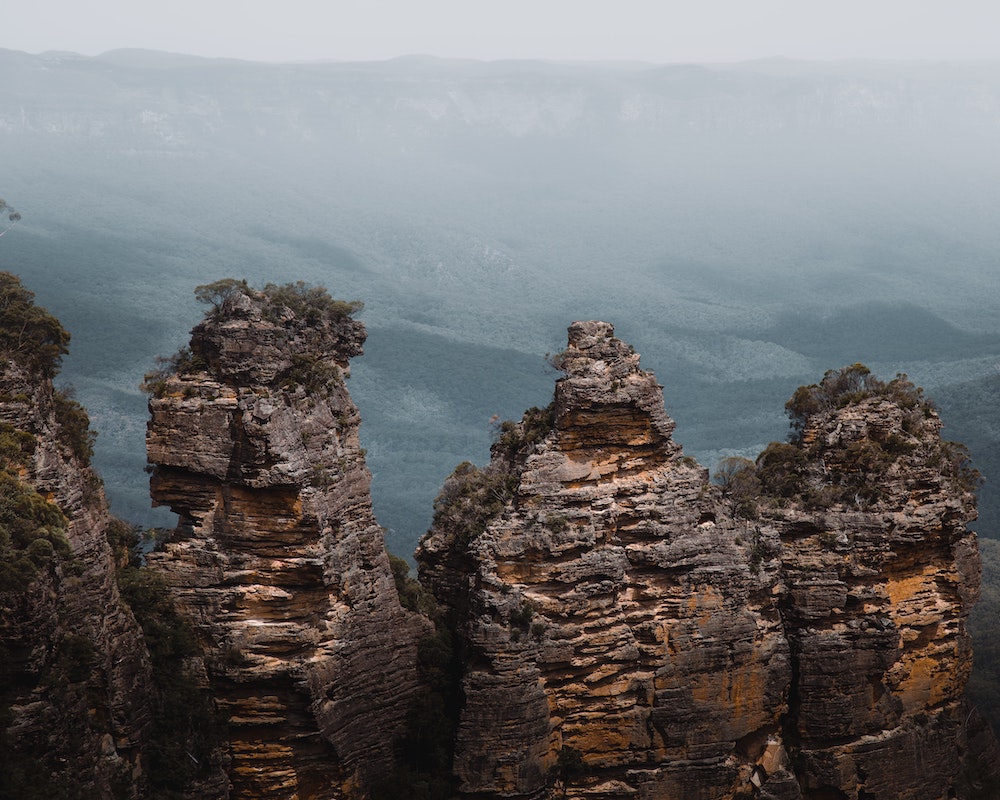 Three Sisters is a 200 million-year-old rock formation on Aboriginal territory within the Blue Mountains. Photo by Kevin Bosc. 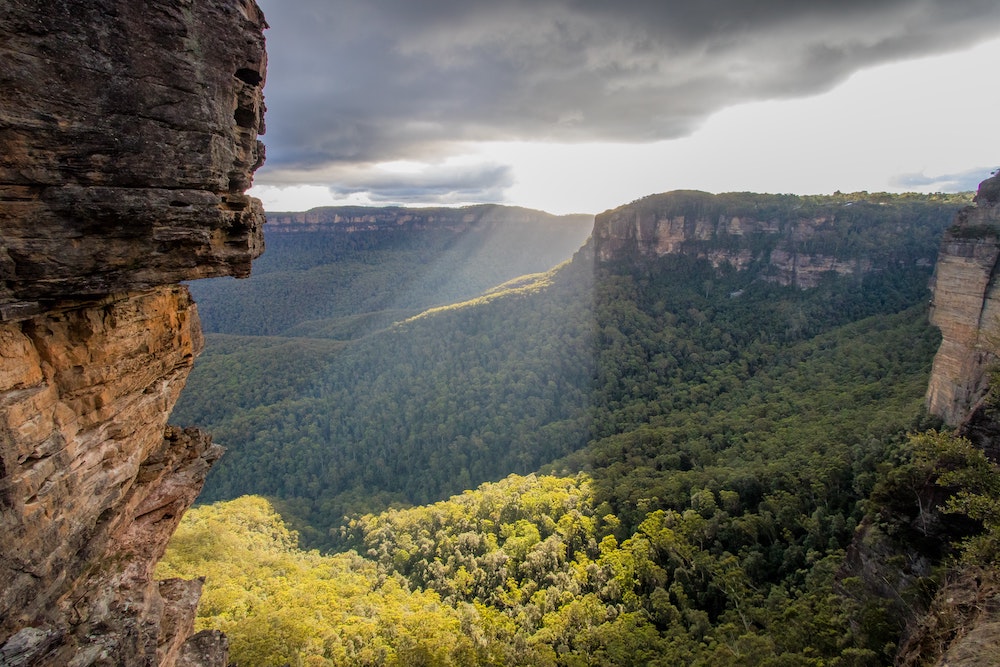 Enjoy walking, hiking, and breathing in the gorgeous views the Blue Mountains have to offer. Photo by Quentin Grignet.

Once you take in the view of Jamison Valley and the Three Sisters from the Echo Point Lookout, there’s no mistaking you’re somewhere special: There are many Aboriginal legends surrounding the 200 million-year-old Three Sisters formation, which stands on the land of Gundungurra and Darug People. Hiking options abound here, but if you’re not looking for a major trek, you can follow the short, 30-minutes return bushwalk pathway behind the Visitor’s Center to get close to the first sister. If a bigger adventure is in order, take your pick: you can descend 998 stairs on the aptly-named Giant Stairway track, rappel down the Grand Canyon Track, or take a three-day bush walk. Personally, I walked along the under-a-mile Wentworth Falls track, taking in views of the valley, lush covered pathways, and the reward of dipping my toes into the top of the waterfall.

After your hike, fuel up at Bar NSW at The Lookout Echo Point, with cheesy garlic bread, a burger, fish & chips, or pasta. The star of the show here is the view of Echo Point from the terrace, which hosts live music and entertainment on the weekends.

The Jackalope Hotel Brings the Australian Countryside to the Future → 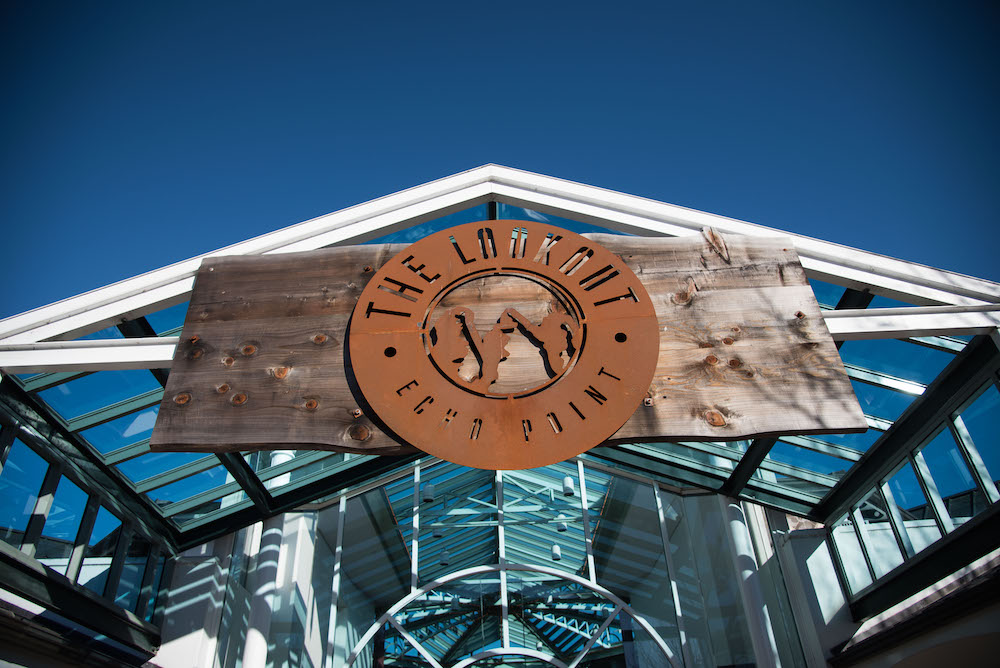 If the view of the Blue Mountains from Bar NSW hasn't already sold you, enjoy the classy rustic wood-and-copper interior and locally sourced wines on offer. 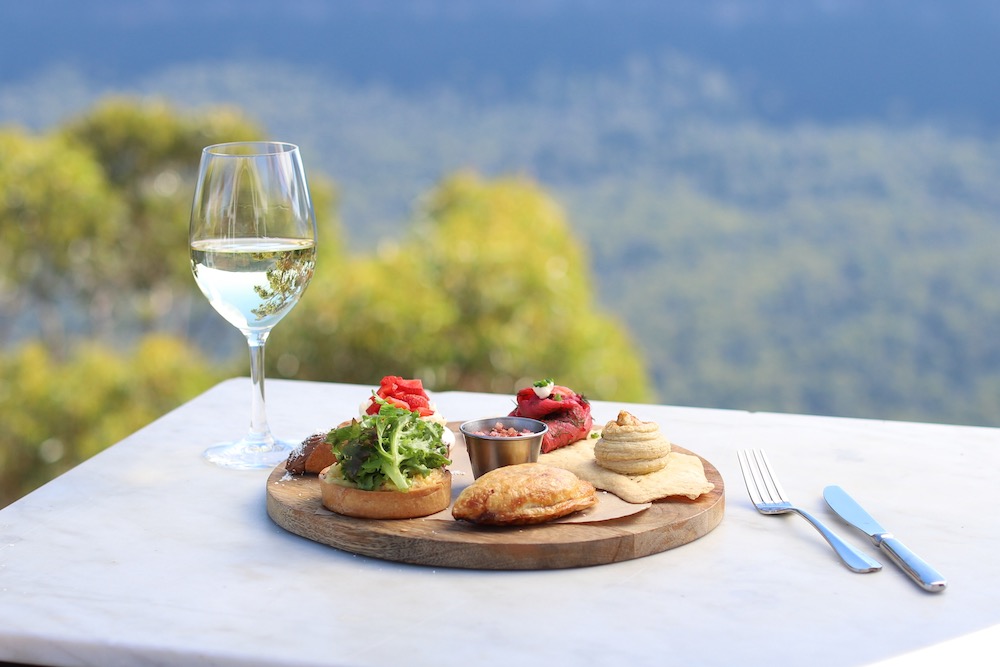 Expect light bites and refreshments at the casual yet world-class Bar NSW. No reservations needed, according to their website. 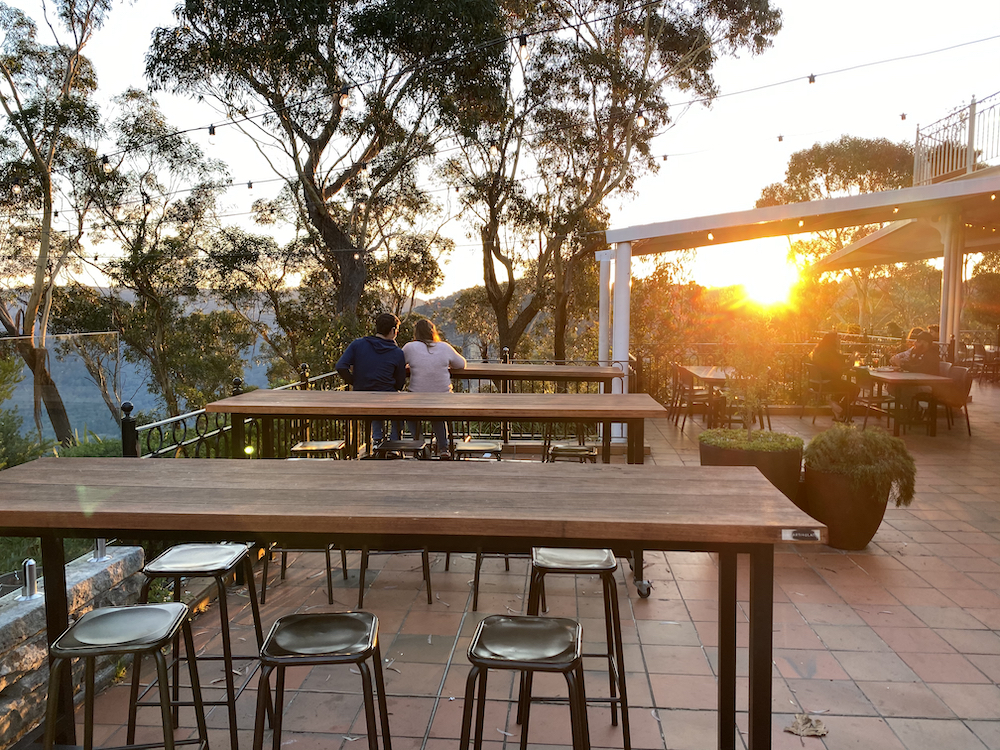 Opt for terrace seating at Bar NSW to enjoy the sublime views, plus live entertainment on the weekends.

Roughly half a mile from the center of Leura, a small town of 5,000 nestled in the Blue Mountains, you’ll find the Old Leura Dairy Farm. Taking its name from – you guessed it – the dairy farm that operated on the site in the early 1900s, the bed & breakfast now has six structures (plus a hot tub) that sleep from two to eleven visitors. The cottages—with names like “The Milking Shed” and “Moo Manor”—were either renovated or built from scratch using 90 percent recycled material. A lovely continental breakfast can be delivered to your door each morning, and other catering can be arranged for large groups. Each cottage also includes a kitchen, so you can cook up your own meal at the end of a long day of hiking.

If going out to eat is more your style, Leura Garage has something for everyone. Housed in a former car mechanic shop, the restaurant still features tires and mechanic tools as part of its decor. Using local produce from the surrounding area, the menu features pizzas, tapas, soups, shared plates, and more. 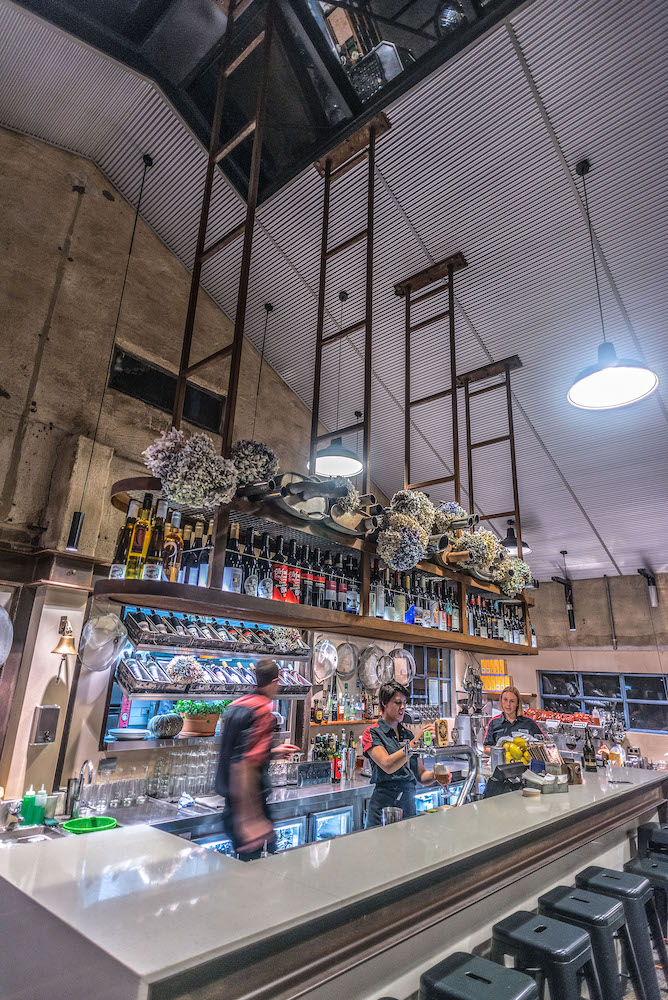 The commitment to a vintage mechanic aesthetic makes Leura Garage a fun place to visit and "refuel" after a long day's hike. 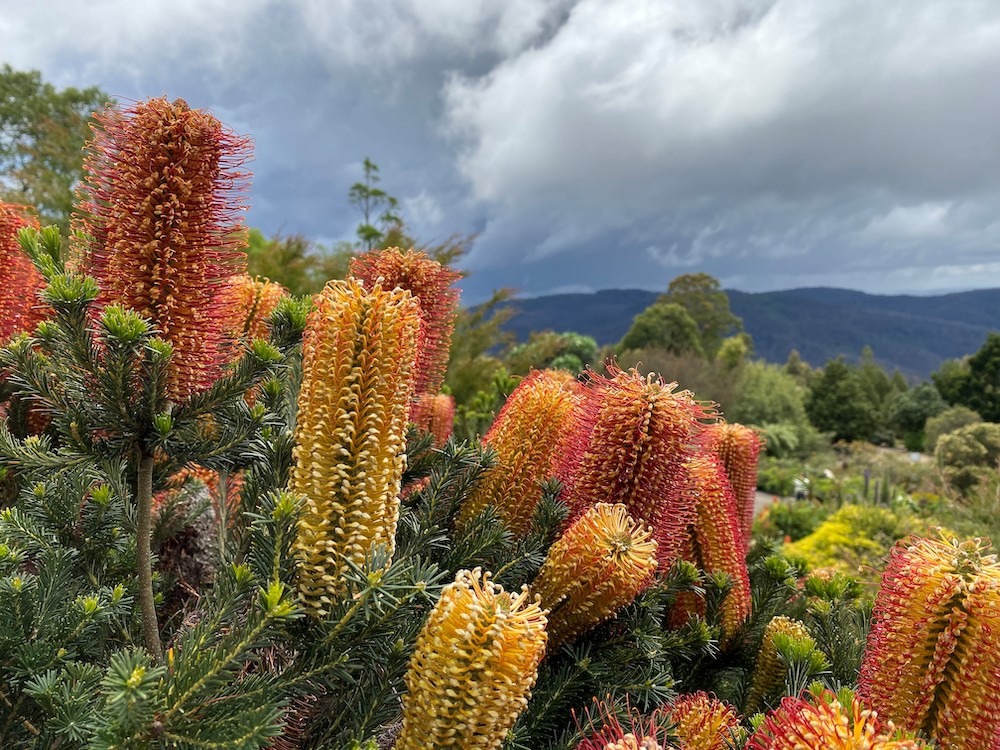 Acquaint yourself with the sheer diversity of flora and fauna Australia has to offer at the Botanic Gardens at Mt. Tomah.

Tucked into the north side of the Blue Mountains National Park, the Botanic Garden at Mount Tomah is the highest botanic garden in Australia at 3,300 feet. 69 acres make up the terraced garden, which is surrounded by 320 acres of conservation land—90% of which was impacted by the 2019 bushfires. Fortunately, many of the garden’s rare species, including the Wollemi Pine, were unharmed. Discovered in New South Wales in 1994, the Wollemi Pine and its relatives were thought to be long extinct. They’re now classified as critically endangered, though cloning attempts have been successful and a recovery plan is underway. Still, the original discovery site in Wollemi National Park is guarded so closely that rumor has it the firefighters who were flown out to protect the trees during the bushfires were blindfolded.

Following the bushfires in Australia (and in the midst of the COVID-19 pandemic everywhere else in the world), partners Sean Moran and Michael “Manoo” Robertson opened High Hopes Roadhouse in Bilpin in June 2020. The couple’s nearby farm supplies the restaurant with eggs, vegetables, chicken, beef, and other produce for its typical tavern fare, like roast pumpkin soup, linguine with rocket, steak and eggs with greens, and ham and cheese toasties—a menu that’s displayed casually on an oversized chalkboard. The decor is the Blue Mountains version of Moran and Robertson’s Sydney restaurant, Sean’s Panorama in Bondi, swapping seashells and beach paintings for checkered tablecloths, dark wood floors with rugs, antique furniture, and a fireplace. A candy shop in the back rounds out the wholesome vibes. 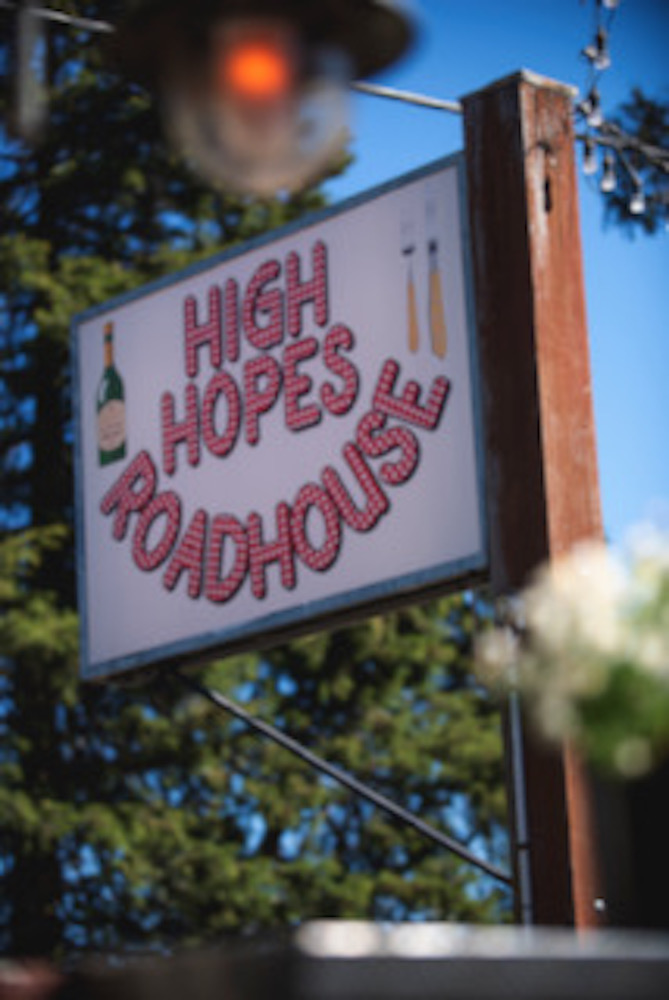 The ingredients for dishes at High Hopes Roadhouse are sustainably sourced from owner-couple Sean and Michael's nearby farm. Photo by Nick Wood. 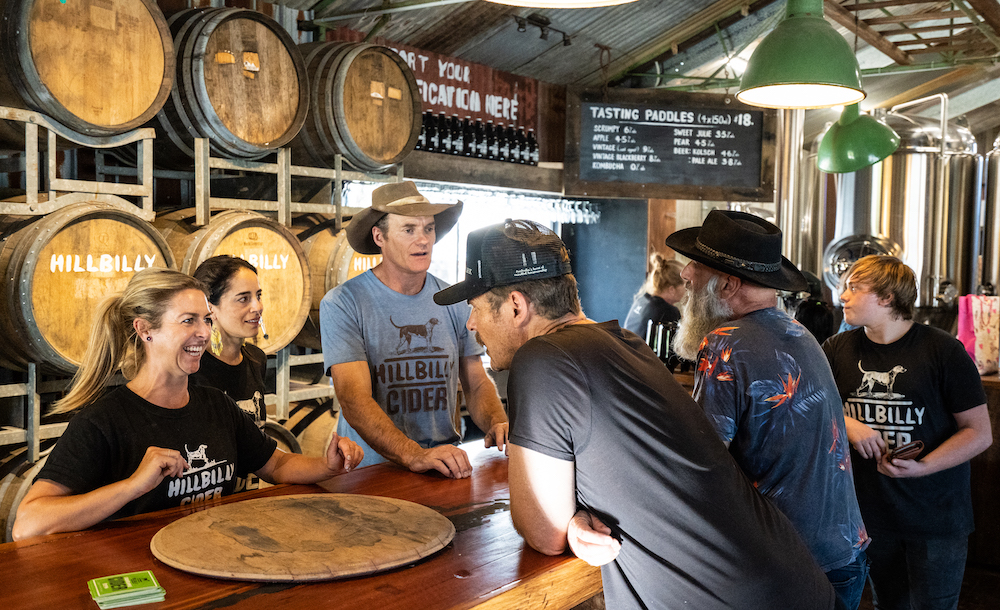 Hillbilly Cider also makes authentic Neapolitan style pizzas, even catering to gluten free and vegan clientele. (Both the pizza and the cider!) 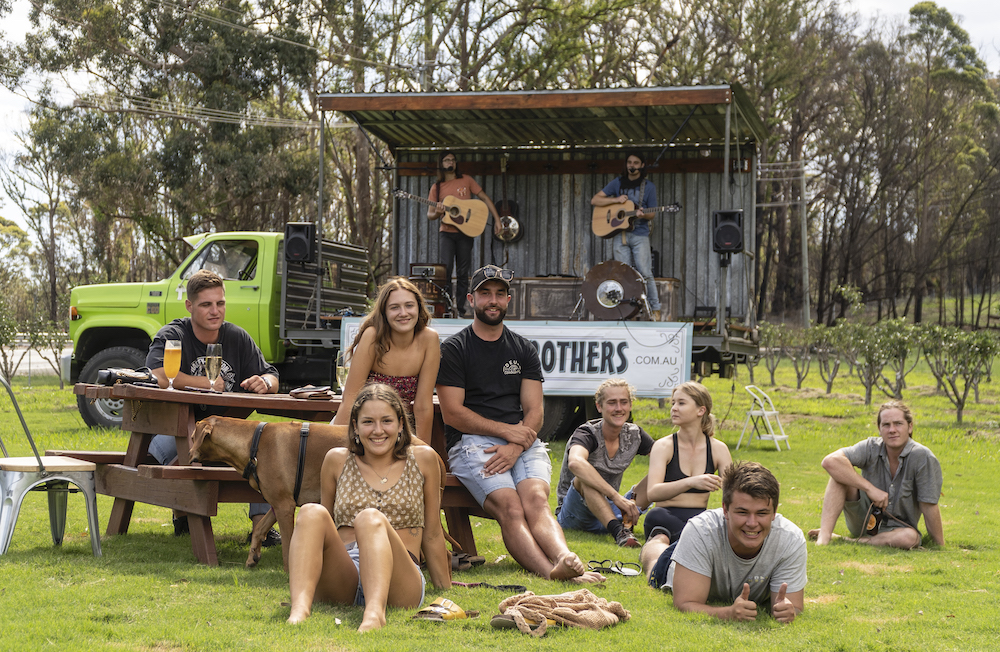 Natural wine enthusiasts should look to Hillbilly Cider Shed for local, minimally-altered cider. “Just apples with altitude and a bit of good old Hillbilly magic,” as noted on the website.

Founded by Shane and Tessa McLaughlin, who moved to their Bilpin orchard in 2007, Hillbilly is the only cider in the world that uses Julie apples—the first commercial apple discovered in the Blue Mountains area since the Granny Smith apple 100 years ago. The Sweet Julie cider is just one of many on offer, which also includes Crushed Pear, Scrumpy, and non-alcoholic varieties.

At the start of 2020, Shane and Tessa were meant to expand their operations to open a storefront and casual restaurant called The Cider Shed—Shane himself stayed in Bilpin to protect the structure from being burned in the bushfires. And lucky for the rest of us, who can now spend an afternoon at the picnic tables in the sun or near the fireplace, taking in live music and enjoying wood fired pizza with Hillbilly’s cider.