Take a stroll down to the Brighton Palace Pier for fun and games by the seaside.
Like a LocalChloe Scheffe

British illustrator Sophy Hollington’s medium of choice is linocut. She hand carves all her drawings into blocks of linoleum, applies ink, prints them on paper, scans her favorite print, and then applies color digitally. It’s a time-consuming process, especially for a commercial illustrator, but she has always enjoyed working under fast deadlines on specific briefs. “It’s a cliche, but I can’t remember wanting to do anything else,” she says. “Well, apart from a year spent deep in an equestrian mania when I was 10. Then I wanted to be a ‘horse photographer.’”

Hollington grew up and went to university in London, but after ten years splitting her time between illustration and work as a commercial printer, she moved to Brighton to set up her own studio space and pursue illustration full-time (which, let the record show, she has done with incredible success). Here, we join Hollington for her ideal day in her adopted city. 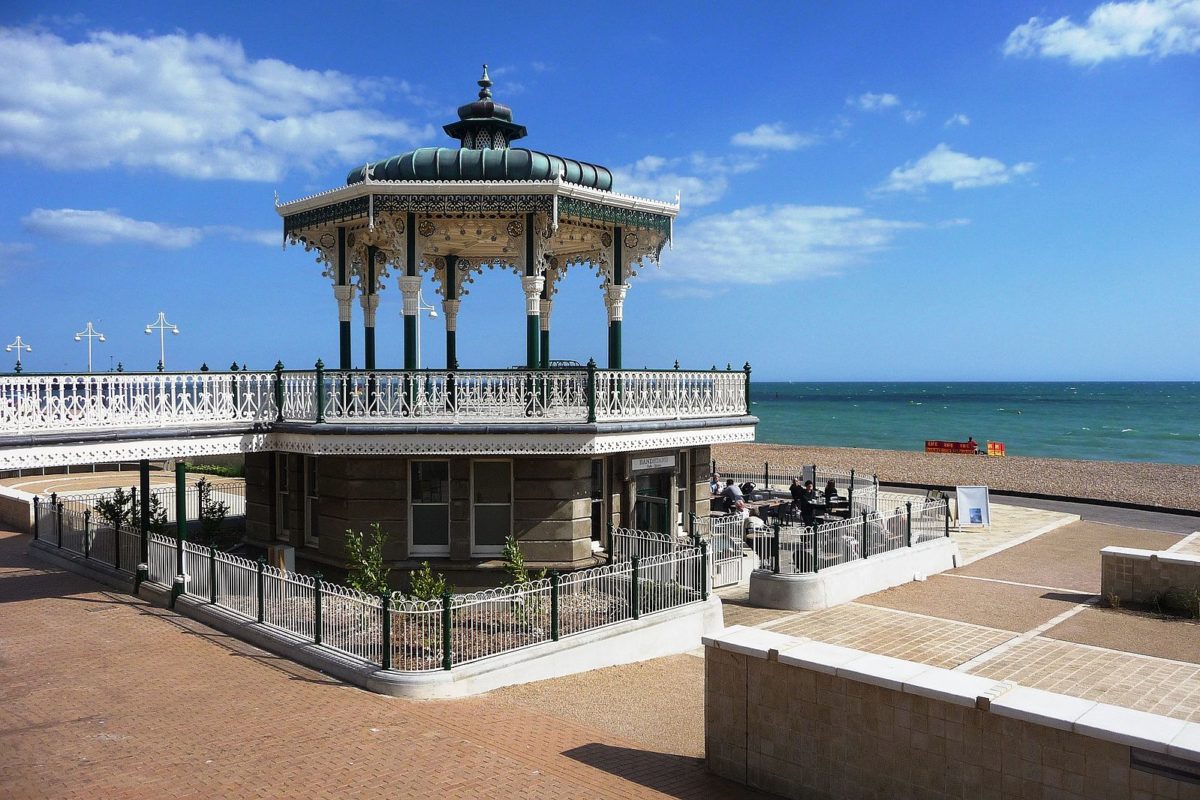 The Brighton Bandstand has hosted performances for over a century. 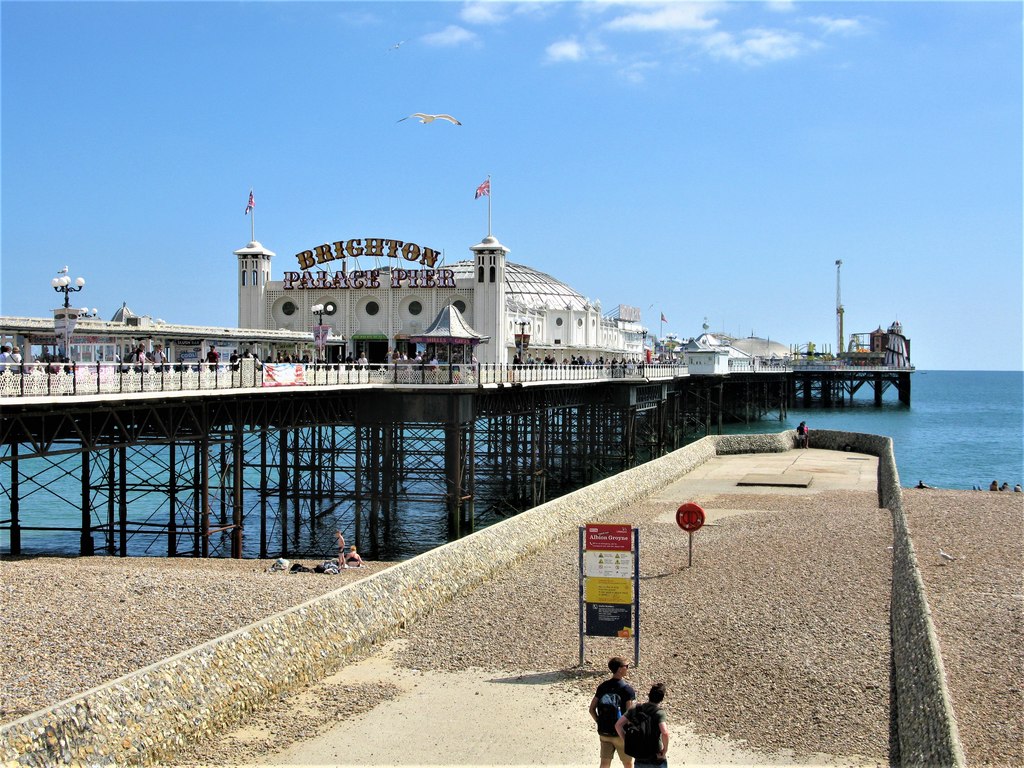 The Brighton Palace Pier is one of the city's most iconic attractions.

A Million Cups of Coffee

You’ll find a lot of options for coffee in Brighton, so I’m a regular at a few different places. Flour Pot Bakery does a very decent black filter coffee (my favorite), plus it’s just around the corner from my studio and I can pick up a vegetarian sausage roll while I’m at it.

Breakfast (Or Not) and a Stroll

I don’t really do breakfast unless I’m hungover. On a typical day, I’ll pick up a pastry or some fruit from HISBE, an ethical supermarket that’s also close to where I work. I often also buy my lunch ingredients there, as they’re one of the only supermarkets that allows dogs inside.

Walk along the seafront next, from the Palace Pier to the Bandstand, and grab another coffee to drink on the pebbled beach while looking out to sea. Wander back and get your tarot read under the pier while you snack on a freshly fried donut. If you’re into rides and seedy seaside sights, then a blast down the pier itself is always fun too. The ghost train is wonderfully bad. 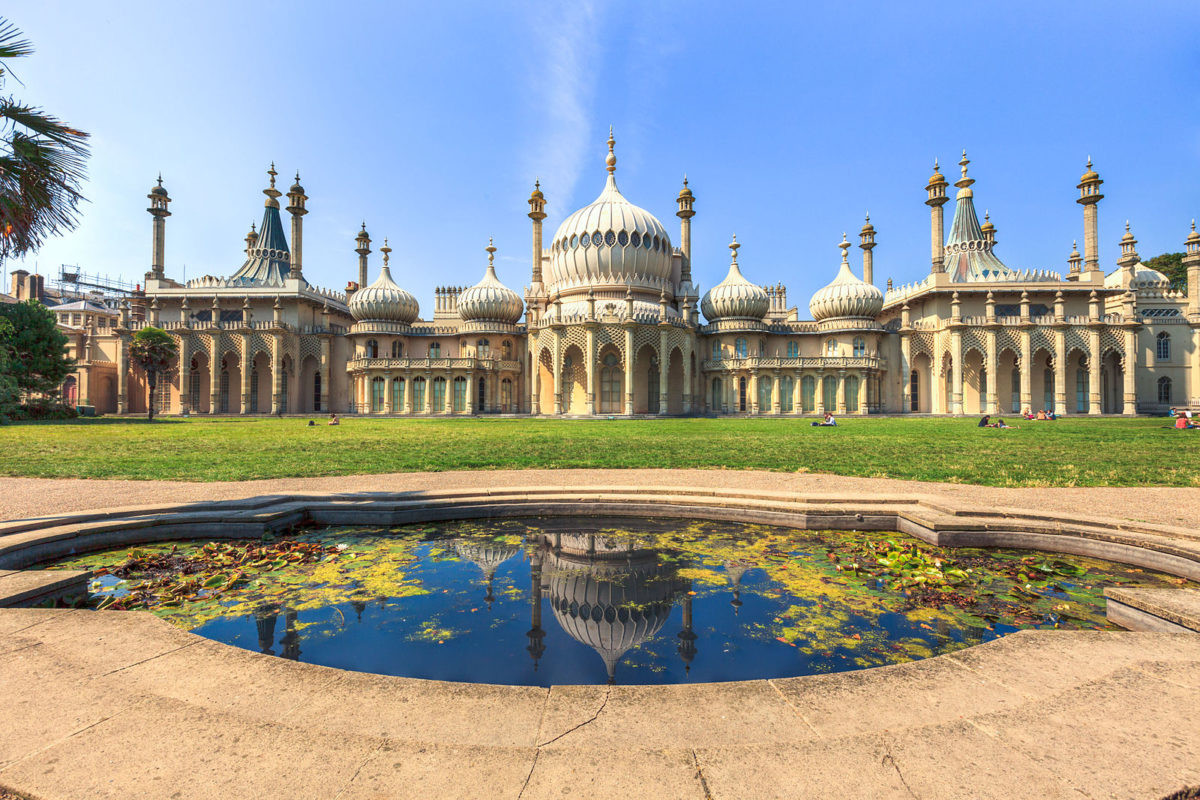 Brighton's Royal Pavilion was built in three stages, starting in 1787, for the Prince of Wales. 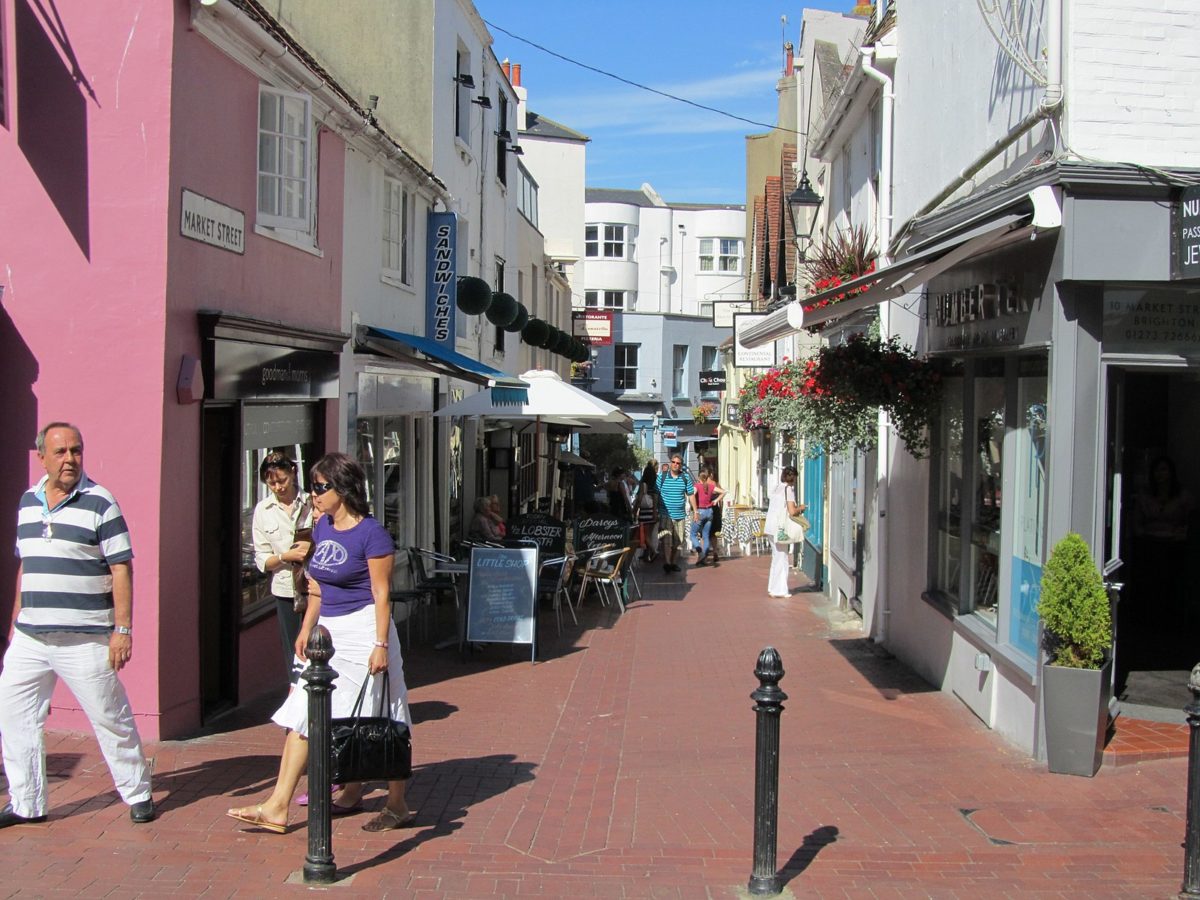 The Pond in the North Laines does great steamed bao buns with all kinds of unorthodox fillings, including fried chicken and pineapple. I also highly recommend Helm Ston, a vegetarian cafe (also in the North Laines) that has something called The Wonderbox on its menu—a takeaway box filled with fried potatoes, broccoli, feta, and spicy sauce. Brighton Open Market on London Road contains a newly opened Mexican restaurant called CasaAzul that serves authentic, delicious, cheap (high-value!) tacos. There are loads of vegan options, too, if that’s your thing.

After lunch, take a walk through The Lanes (North and South), stopping by Snoopers Paradise, a sprawling indoor flea market that I never leave empty-handed. Then visit the Pavilion Gardens and gape at the Royal Pavilion itself, in all its bulbous glory. 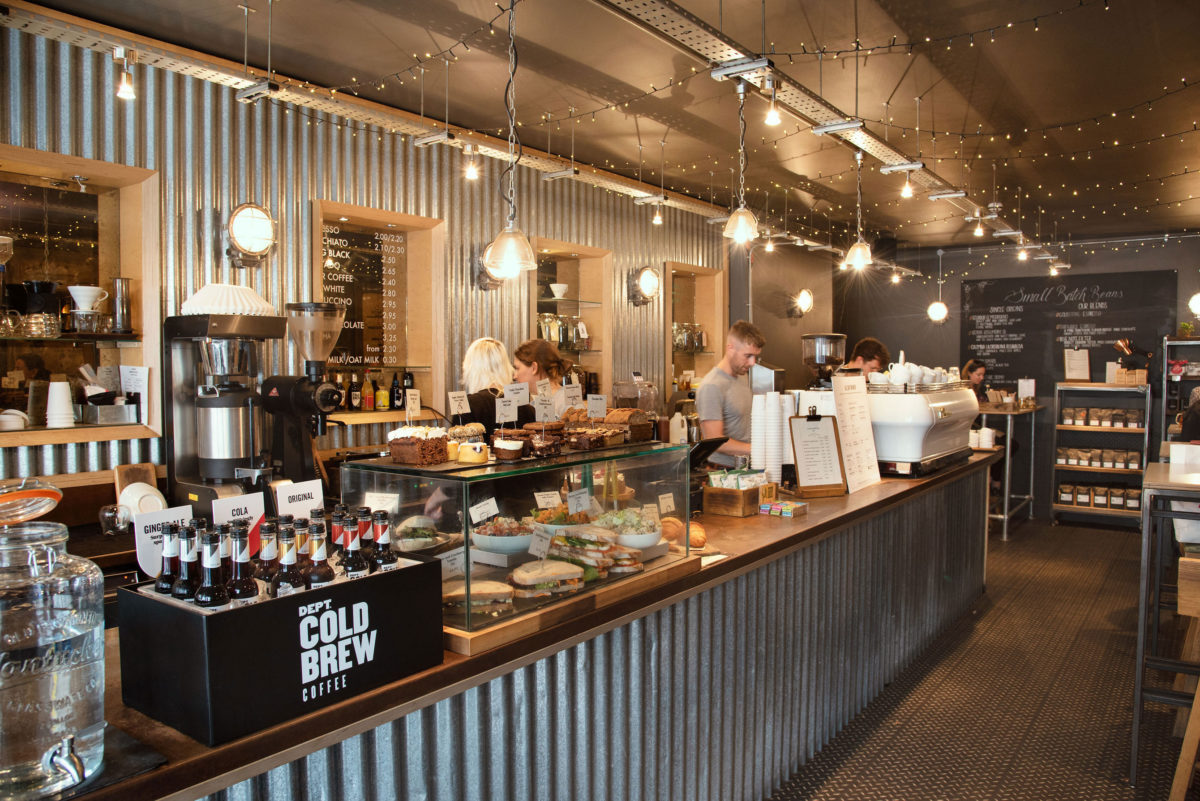 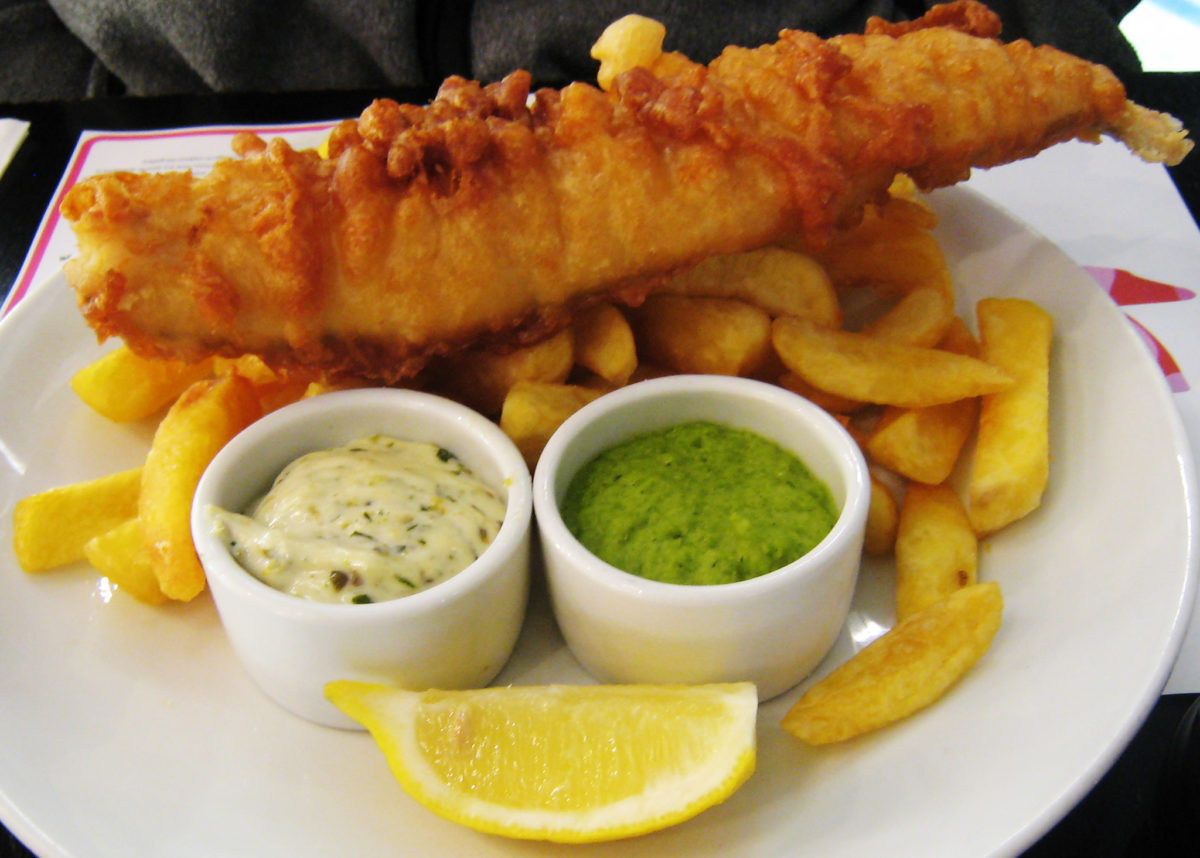 Fish, chips, and mushy peas by the sea: a must when in Brighton. Photo by Charles Haynes.

Teach a Man to Fish

There’s never a soul in there, but the tiny Brighton Fishing Museum on the seafront gives you a great look at Brighton’s past lives as both a fishing port and a glamorous holiday mecca. It’s free, so you can spend your cash on a delicious kipper bun from the fish smokehouse next door, instead.

For your last caffeine hit of the day, stop by Small Batch. The coffee is great and they have cafes all over the city.

Nothing beats grabbing fish and chips (salt and vinegar and mushy peas on the side are compulsory) and a can of beer and taking them down to the beach. The seagulls are brutal though, so you’ll need to be wary or they’ll steal the lot. Maintain eye contact to keep them away.

Drinks (and, What the Heck, More Dinner)

I like an “old man pub” (think ancient carpets, horse brasses, mild ale, and scampi fries) and Brighton has a few of them left. The Basketmakers Arms is my go-to and favorite and always has a jovial, living room atmosphere. I’ll do a few pints there, then a vegetarian cheeseburger at Brighton institution Grubbs Burgers.

The Seven Sisters Cliffs at Beachy Head are located in Sussex, just an hour from Brighton.

The Beachy Head Lighthouse, as seen from Belle Tout.

Where to Stay in Brighton

Any of the hotels on the seafront that can serve up a view would be ideal. It’s doable on almost any budget, from the cheapest hostels to the most expensive hotels.

What to Read Before a Trip to Brighton

Music to Listen to Before You Visit Brighton

The 60s revival scene has always been pretty robust here—mods, riots, rockers, Quadrophenia, etc.—so I’d recommend some 60s garage rock, which is what I got really into as a teen. Listen to The Pebbles while walking on actual pebbles.

What to Watch Before a Trip to Brighton

Now that I’ve mentioned it, Quadrophenia.

Brighton is famously quite touristy and trashy, but like all good seaside towns on this isle, if you come here in winter you’ll almost have the city to yourself. Then you can soak up our quintessential British bleakness in peace.

If you have enough time to make it out of the city, go for a walk along the cliffs at Beachy Head. They’re only a couple of coastal towns away, easily reached by train. Then, if you return to Brighton via train, avoid the walk straight down to the sea along Queens Road and West Street. It’s much better to head into the Laines and travel by those. Fewer tourists.