Andre Hill is the chef at Upper Bloem in Cape Town, a restaurant known for brining Cape Malay cuisine to a modern, elevated setting.
Like a LocalSarah Khan

Though he’s lived and worked everywhere from England to New Zealand to Swaziland, Cape Town chef Andre Hill is happiest at home. “Every time I’ve been away and had the opportunity to stay overseas, something kept calling me back,” he says.

Part of what keeps bringing him back to Cape Town is the chance to be a part of the country’s movement to celebrate and elevate local flavors. “Traditional South African cuisine is only recently starting to get appreciated in the mainstream—remember, it’s not that long ago that our country was very forcibly divided, and that had an effect on food culture,” he says. “Of course, there was and is always a rich history in food within communities—it was just that people trying to do it commercially never really got the recognition they should have gotten.” 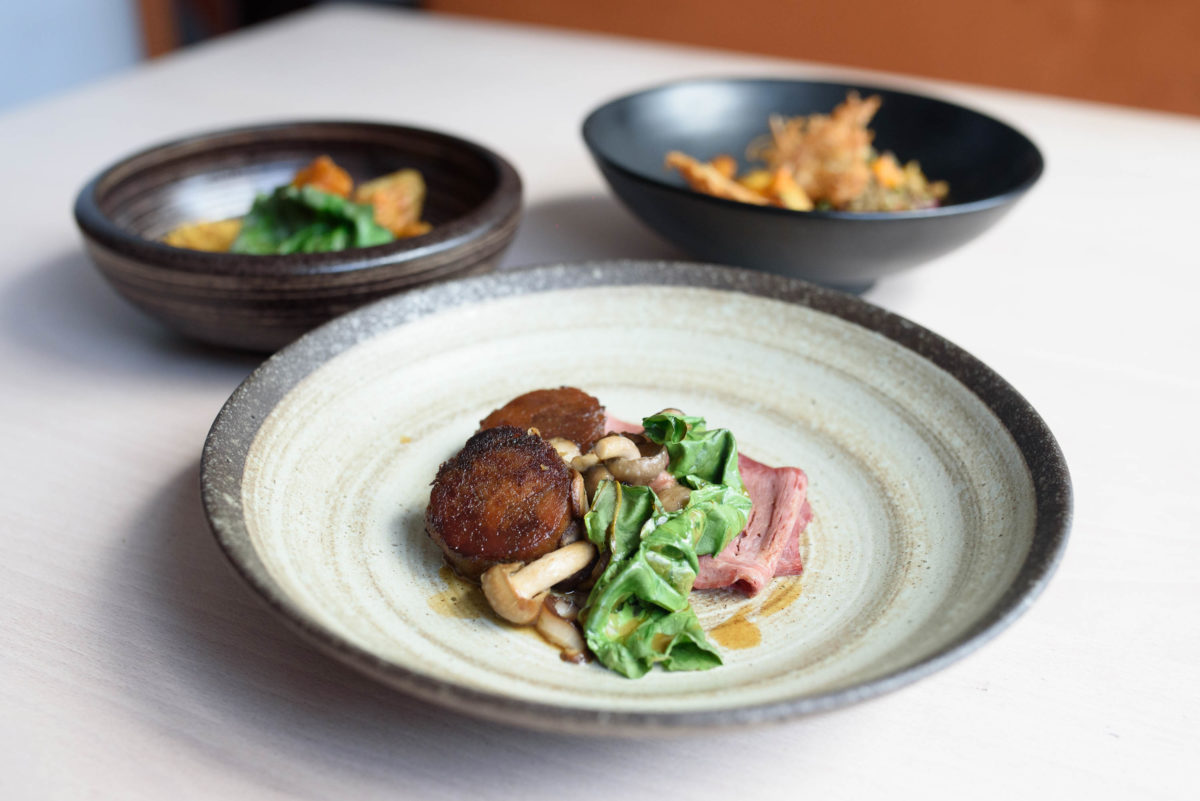 Cape Malay cuisine at Upper Bloem is more than just interesting flavor combinations and ingredients: It's about fostering a sense of community.

All that is finally beginning to change: When Andre opened the chic Upper Bloem in Cape Town’s Greenpoint neighborhood in 2018, he quickly amassed a devoted following for his spins on the flavors of the Cape Malay community from the Bo-Kaap district where he grew up. “It’s vibrant, spicy but not too spicy, and fragrant with interesting textures,” he says, describing the cuisine unique to Cape Town with its vivid mix of Asian, African, and European influences. “Cape Malay cuisine has been a huge source of inspiration, but the part I really hope to capture is the feeling of sharing, and the love and community that I felt growing up.”

While Cape Town is undoubtedly blessed with natural beauty, it’s communities like these that set it apart from anywhere else in the world. “I think Cape Town is a good place to visit, mainly because of its richness in diversity of people,” he says. “I think we are unique in the fact that you can have two different people who grew up here, who live 20 minutes away from each other, but who are and sound nothing alike.”

See below for Andre Hill’s guide to Cape Town. 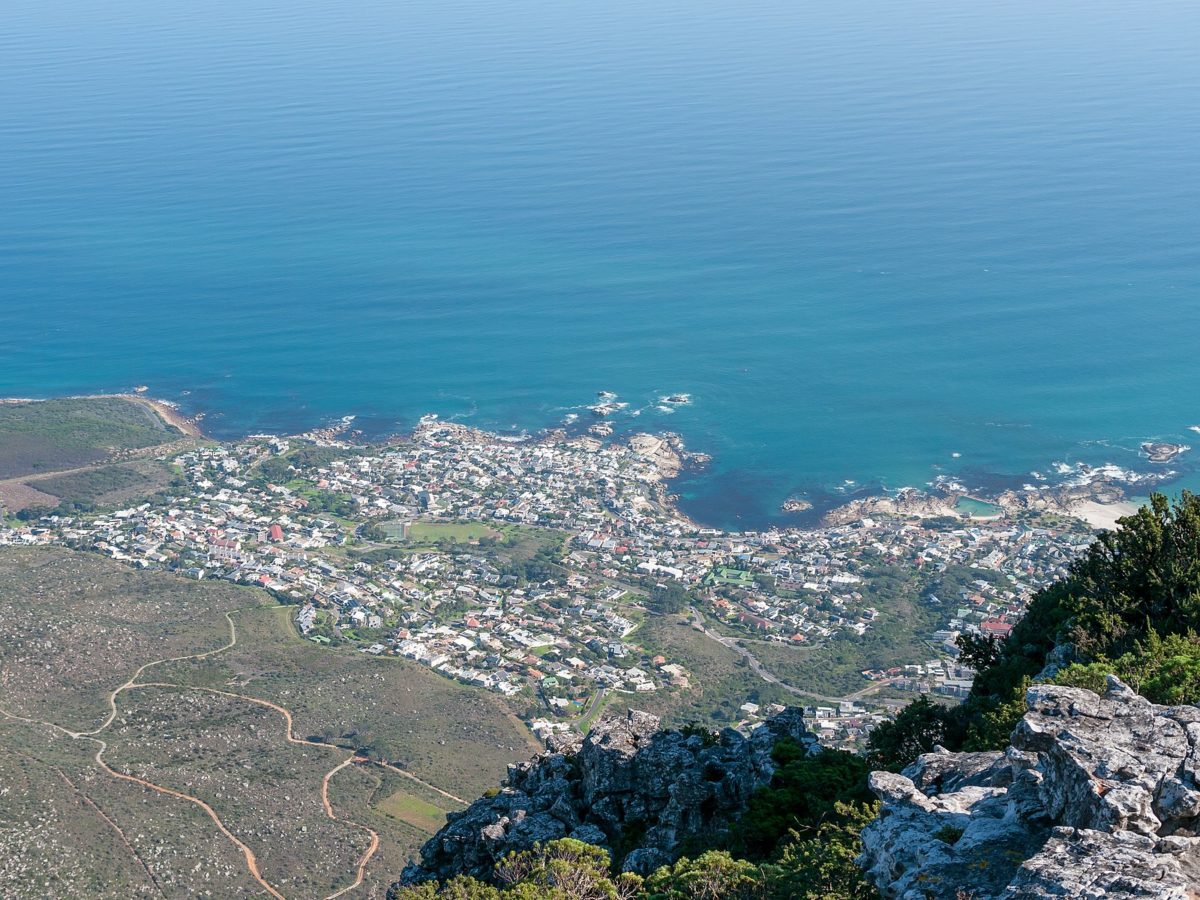 Cape Town as viewed from the famous Table Mountain range.

I usually skip breakfast. Instead, I get some tea at Ka Pa Tée (but they do secretly serve some good coffee to those who cannot go without). It’s a spot in the middle of the city, but the space has a really relaxing energy, an amazing selection of teas, and the folks who own it are pretty cool.

Take a hike up Table Mountain on one of the many mountain trails—it’s the best way to really get a good look at the city. But a hike I actually like the most is about an hour from Cape Town, close to Gordons Bay, at the Steenbras Nature Reserve. The Crystal Pool hiking trail has a bit of everything—it’s short, but still a little challenging for fitter people. You’ll need to scramble rocks, walk on some sandy paths, and do a little bushwacking, but your prize at the end is getting to swim in the natural pools surrounded by mountains (so you need your swimming gear). Just an FYI—you do need to get a permit before you go to hike there. 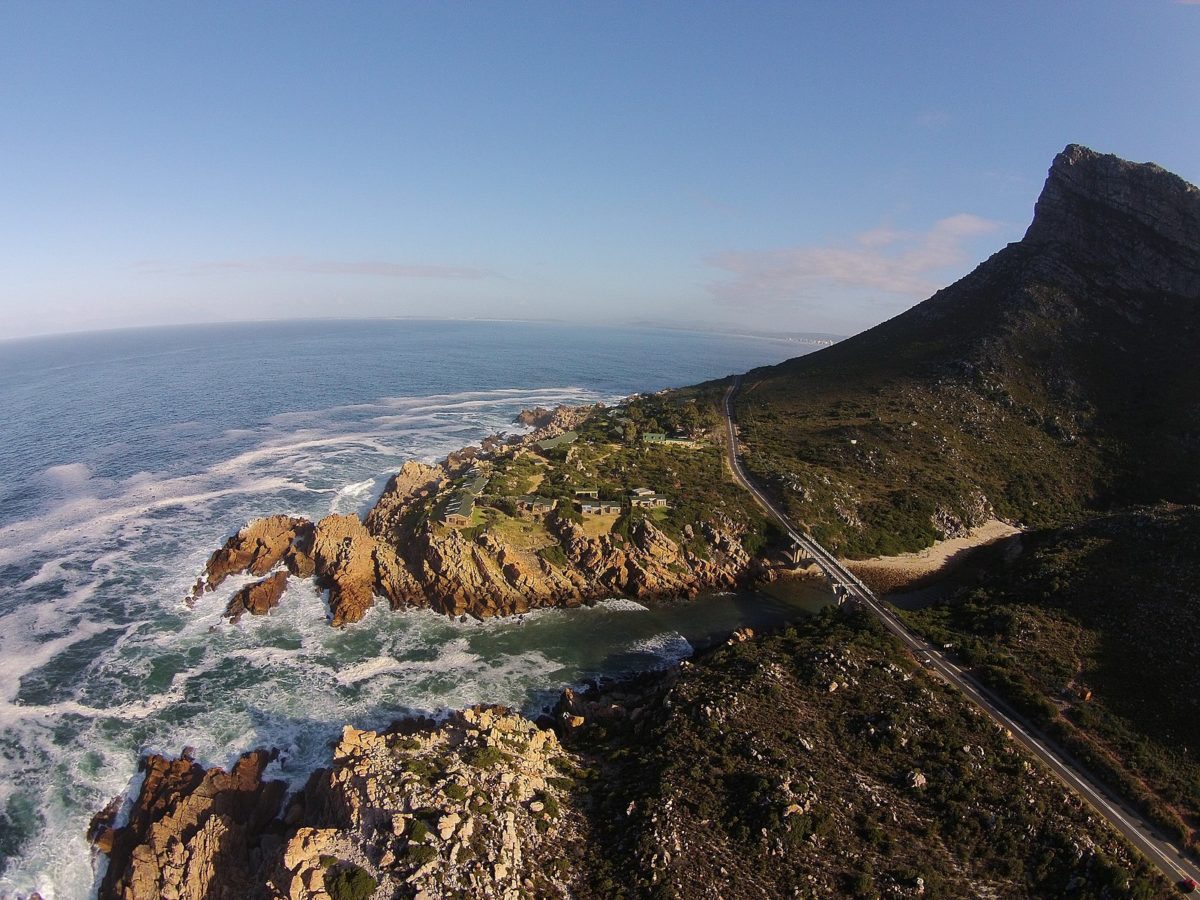 The Steenbras Nature Reserve is an under-the-radar hiking alternative to Table Mountain in Cape Town.

There are so, so many restaurants to choose from in Cape Town. My favorites are both in Seapoint. At ChiCha, run by chef-owner Julian Gabriel, there’s live music on Sundays. Chef Henry Vigar at the contemporary French restaurant La Mouette had quite a big role to play in my career—I actually worked at La Mouette as head chef for three years before Upper Bloem. We connected through cooking, and our motivation, work ethic, and drive was very similar, so we cooked well together, and I recommend going there as well.

District Six Museum should not be missed. You get to know some of the real history of Cape Town. It’s a memorial of what the District Six neighborhood was before the forced removal of people of color from their homes during Apartheid. I think it’s important for visitors to try to understand the complexity of not only our city, but our country—what devastation that actually caused, what scars are still there, and get an understanding of how people are still affected by this today. Taking this into account really allows me to appreciate how strong people here are even though they still face difficulties today. Apartheid might be over, but it takes a very long time to undo those systems designed to keep certain people down. 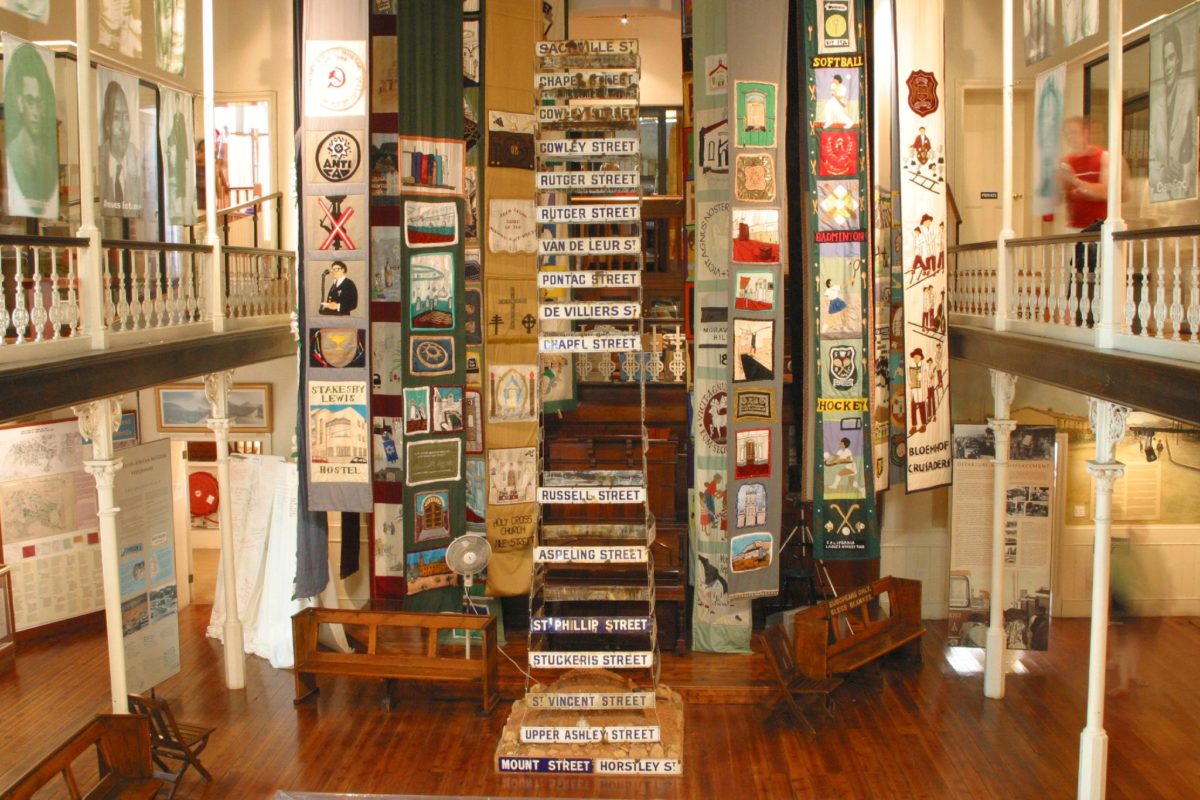 Upper Bloem is the place to be for dinner, without a doubt—not because that’s where I cook, but because of the great team of people we have working there. And because it’s a set menu, you get a bit of everything. People really seem to love the use of spices and textures, and usually enjoy the simple things the most. One of our most loved dishes is a carrot dish with curry emulsion, goat’s yogurt, candy black rice, and crisps—most people say they never thought carrots could taste like that!

A good place for drinks is Harringtons Cocktail Lounge on Harrington street. It’s very chill with good music and a lekker (South African slang for “cool”) crowd. Afterward, head to Golden Dish in Athlone for the best gebbas (Cape Town’s signature sandwich) in town. I would advise you go with a local to fully appreciate it. 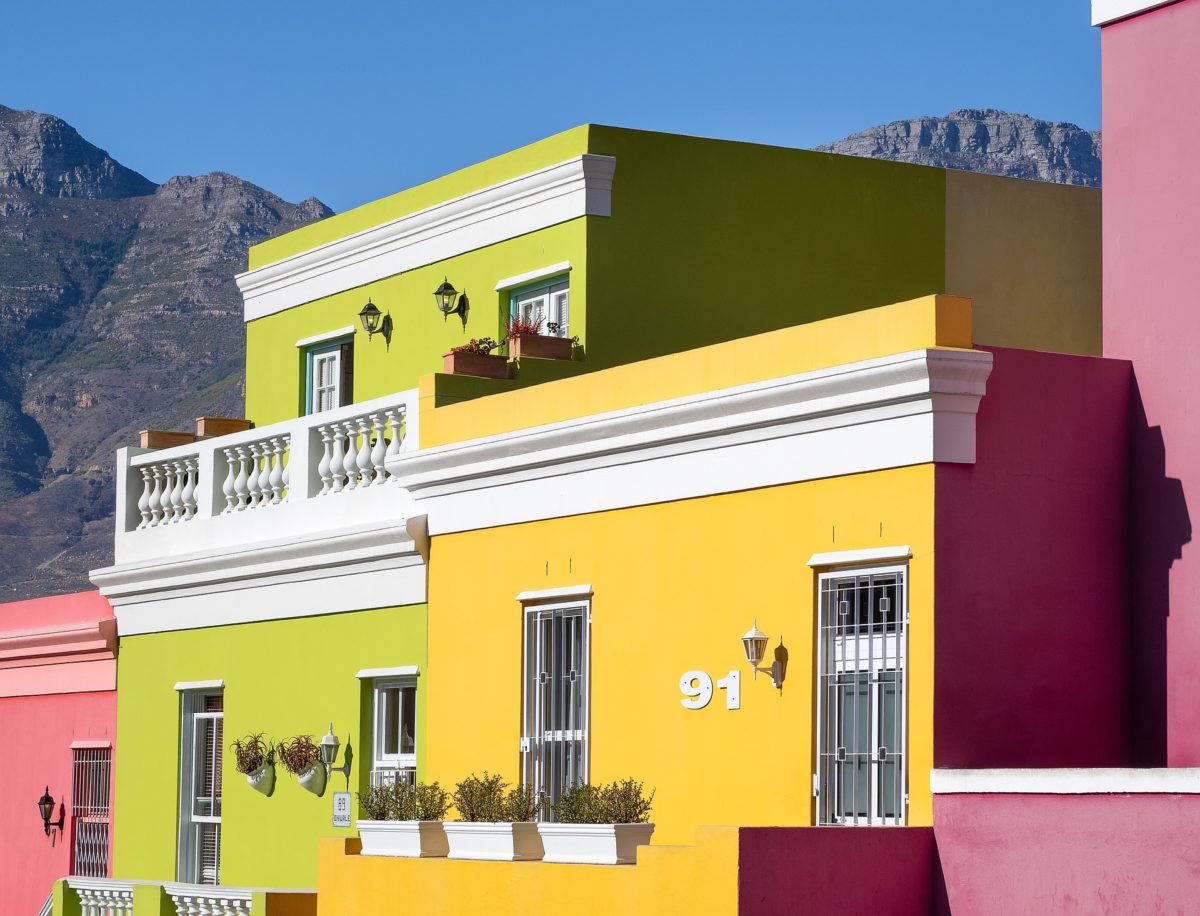 The colorful Bo-Kaap neighborhood of Cape Town, where Hill was born and raised.

The weather is pretty good: hot summers [December through March] and not-too-cold winters [June through September]. You could still get a 20-degree Celsius [68° F] day in winter, but because of the mountains and it being an ocean city, it is also subject to change quickly within a day or depending on which side of the mountain you are on.

Read before you go to Cape Town:

An Imperfect Blessing by Nadia Davids, set in 1993. You could go and get any “What to do in Cape Town” type of book, but I think reading this would give a bit better context on the complexity of our country.

I guess it’s the same wherever you go: Treat people with respect, even those who might be asking you for something on the street. Acknowledging them as a human is just as important, even if you don’t give them anything. And don’t make judgments too quickly. South Africa has had a difficult past. The legacy of that doesn’t change that quickly—it’s been 24 years.

Where safety is concerned, I would say it’s pretty much the same as most cities you go to. Try not to go to places alone, especially ones you have very little knowledge about. I don’t mean taking a walk in the city, but more if you’re going for a hike or going to an area that is not typically on the tourist map.